Mexicanos: A History of Mexicans in the United States (Paperback) 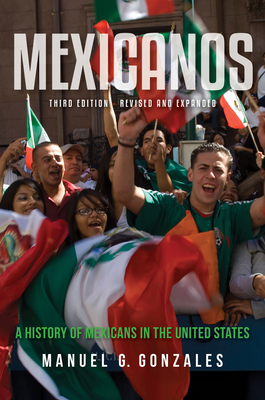 Responding to shifts in the political and economic experiences of Mexicans in America, this newly revised and expanded edition of Mexicanos provides a relevant and contemporary consideration of this vibrant community. Emerging from the ruins of Aztec civilization and from centuries of Spanish contact with indigenous people, Mexican culture followed the Spanish colonial frontier northward and put its distinctive mark on what became the southwestern United States. Shaped by their Indian and Spanish ancestors, deeply influenced by Catholicism, and often struggling to respond to political and economic precarity, Mexicans play an important role in US society even as the dominant Anglo culture strives to assimilate them. With new maps, updated appendicxes, and a new chapter providing an up-to-date consideration of the immigration debate centered on Mexican communities in the US, this new edition of Mexicanos provides a thorough and balanced contribution to understanding Mexicans' history and their vital importance to 21st-century America.

Manuel G. Gonzales is Professor Emeritus of History at Diablo Valley College. His books include The Hispanic Elite of the Southwest; (with Richard Delgado) The Politics of Fear: How Republicans Use Money, Race, and the Media to Win; and Mendota: Life and Times of an Emerging Latino Community, 1891-2012. He is editor (with Cynthia M. Gonzales) of En Aquel Entonces: Readings in Mexican American History.