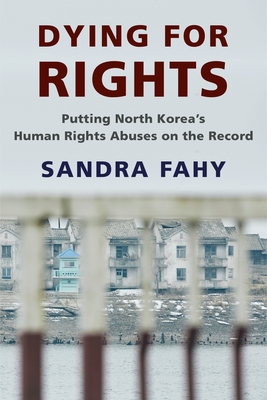 North Korea's human rights violations are unparalleled in the contemporary world. In Dying for Rights, Sandra Fahy provides the definitive account of the abuses committed by the North Korean state, domestically and internationally, from its founding to the present. Dying for Rights scrutinizes North Korea's treatment of its own people as well as foreign nationals, how violations committed by the state spread into the international realm, and how North Korea uses its state media and presence at the United Nations. Fahy meticulously documents the extent of arbitrary detention, torture, executions, and the network of prison camps throughout the country. The book details systematic and widespread violations of freedom of speech and of movement, freedom from discrimination, and the rights to food and to life. Fahy weaves together public and private testimonies from North Koreans resettled abroad, as well as NGO reports, the stories and facts brought to light by the United Nations Commission of Inquiry into North Korea, and North Korea's own state media, to share powerful personal narratives of human rights abuses. A compassionate yet objective investigation into the factors that sustain and perpetuate the flouting of basic rights, Dying for Rights reveals the profound culpability of the North Korean state in the systematic denial of human dignity.

Sandra Fahy is associate professor of anthropology in the Faculty of Liberal Arts and the Graduate Program in Global Studies at Sophia University in Tokyo. She is also the author of Marching Through Suffering: Loss and Survival in North Korea (Columbia, 2015).