Leave Me Alone and I'll Make You Rich: How the Bourgeois Deal Enriched the World (Hardcover) 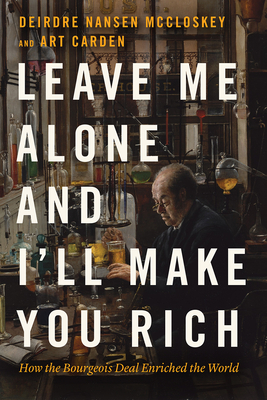 The economist and historian Deirdre Nansen McCloskey has been best known recently for her Bourgeois Era trilogy, a vigorous defense, unrivaled in scope, of commercially tested betterment.  Its massive volumes, The Bourgeois Virtues, Bourgeois Dignity, and Bourgeois Equality, solve Adam Smith’s puzzle of the nature and causes of the wealth of nations, and of the moral sentiments of modernity.   The world got rich, she argues, not chiefly by material causes but by an idea and a sentiment, a new admiration for the middle class and its egalitarian liberalism.

For readers looking for a distillation of McCloskey’s magisterial work, Leave Me Alone and I’ll Make You Rich is what you’ve been waiting for. In this lively volume, McCloskey and the economist and journalist Carden bring together the trilogy’s key ideas and its most provocative arguments. The rise of the west, and now the rest, is the story of the rise of ordinary people to a dignity and liberty inspiring them to have a go. The outcome was an explosion of innovation after 1800, and a rise of real income by an astounding 3,000 percent.  The Great Enrichment, well beyond the conventional Industrial Revolution, did not, McCloskey and Carden show, come from the usual suspects, capital accumulation or class struggle.  It came from the idea of economic liberty in Holland and the Anglosphere, then Sweden and Japan, then Italy and  Israel and China and India, an idea that bids fair in the next few generations to raise up the wretched of the earth.  The original shift to liberalism arose from 1517 to 1789 from theological and political revolutions in northwest Europe, upending ancient hierarchies.  McCloskey and Carden contend further that liberalism and “innovism” made us better humans as well as richer ones.  Not matter but ideas.  Not corruption but improvement.

Leave Me Alone and I’ll Make You Rich draws in entertaining fashion on history, economics, literature, philosophy, and popular culture, from growth theory to the Simpsons. It is the perfect introduction for a broad audience to McCloskey’s influential explanation of how we got rich.  At a time when confidence in the economic system is under challenge, the book mounts an optimistic and persuasive defense of liberal innovism, and of the modern world it has wrought.

Art Carden is professor of economics at the Brock School of Business at Samford University and a frequent contributor to Forbes.com among other popular magazines and scholarly journals.

"For those unable to devote the time to reading The Bourgeois Virtues, Bourgeois Dignity, and Bourgeois Equality, McCloskey has teamed here with Carden to write a popular version. While the argument is the same—namely that respect for human liberty is what led to the Great Enrichment—this book is not a Reader’s Digest condensed version of the trilogy. Carden and McCloskey use this opportunity to make the ideas of the trilogy more contemporary. They do so in two ways. Current policy proposals, such as Senator Elizabeth Warren’s proposal for a 2 percent tax on the wealthy, are used where appropriate. Modern examples, from changes to the television set as owned by the TV Simpsons family to a long list of failed business ideas that wasted resources, such as the New Coke or Trump Airlines, are added to the mix alongside McCloskey's literary and historical examples. Even readers of McCloskey's three prior volumes will find much to enjoy in this updated reprise. Recommended."

“At a time when the mood – and reality – of the times is swinging toward state intervention in the economy – and rightly so, given the potentially Hobbesian world to which the combination of market power and pandemic have brought us – it’s all the more important to keep an open mind and take these arguments from economic liberty seriously. . . The sweep of McCloskey’s historical knowledge is such that the book is just a good read (if you like the tone), and a fraction of the length of the [Bourgeois] trilogy!”

"This thought-provoking work is recommended for economics faculty and students, and researchers in economics and history to ‘think differently’ about these respected disciplines.”

"Read this book and learn why you must know the truth, what truth you need to know, and why the freedom it brings has made almost everyone better off than their parents and grandparents."

"If you are feeling down about the state of the world or pessimistic about its prospects then this is the book to cheer you up. McCloskey and Carden show how much off everyone is today compared to everyone who lived before, and how this is explained not by the usual suspects such as institutions, or capitalism or the profits of slavery and colonialism, or the exploitation of natural resources, but simply by the practice of liberty, letting people be and allowing them to do their thing (and, crucially, to innovate). They also show how fashionable pessimism about the future is wrong in all its modish variants—as it has been since 1798. This is a work for economists, historians, and anyone who wants to understand why the world has become so much better for human beings in the last two hundred and fifty years and is set to continue doing so."

“There is nobody writing today who mixes erudition and eloquence, or wit and wisdom as richly as McCloskey. Together with Carden, she has now found another virtue: brevity. This is the book I want all young people to read to understand how and why they are so much better off than any previous generation.”
— Matt Ridley, author of How Innovation Works and The Rational Optimist