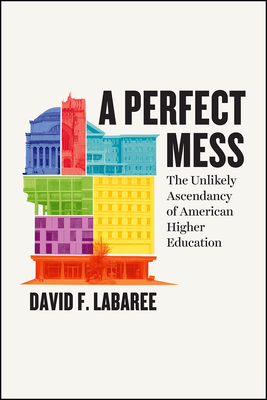 Read the news about America’s colleges and universities—rising student debt, affirmative action debates, and conflicts between faculty and administrators—and it’s clear that higher education in this country is a total mess. But as David F. Labaree reminds us in this book, it’s always been that way. And that’s exactly why it has become the most successful and sought-after source of learning in the world. Detailing American higher education’s unusual struggle for survival in a free market that never guaranteed its place in society—a fact that seemed to doom it in its early days in the nineteenth century—he tells a lively story of the entrepreneurial spirit that drove American higher education to become the best.

And the best it is: today America’s universities and colleges produce the most scholarship, earn the most Nobel prizes, hold the largest endowments, and attract the most esteemed students and scholars from around the world. But this was not an inevitability. Weakly funded by the state, American schools in their early years had to rely on student tuition and alumni donations in order to survive. This gave them tremendous autonomy to seek out sources of financial support and pursue unconventional opportunities to ensure their success. As Labaree shows, by striving as much as possible to meet social needs and fulfill individual ambitions, they developed a broad base of political and financial support that, grounded by large undergraduate programs, allowed for the most cutting-edge research and advanced graduate study ever conducted. As a result, American higher education eventually managed to combine a unique mix of the populist, the practical, and the elite in a single complex system.

The answers to today’s problems in higher education are not easy, but as this book shows, they shouldn’t be: no single person or institution can determine higher education’s future. It is something that faculty, administrators, and students—adapting to society’s needs—will determine together, just as they have always done.

David F. Labaree is professor in the Graduate School of Education at Stanford University. He is the author of many books, including, most recently, The Trouble with Ed Schools and Someone Has to Fail.

“How did a ragbag of colleges become a towering assemblage of world-class universities? In this deft history, David Labaree tracks the evolution of the US higher-education system, an unwieldy array that nevertheless produced 40% of Nobel laureates between 1901 and 2013. US economic ascendancy, the rise of English as a lingua franca, and postwar research funding all played a part; but the fulcrum was the autonomy and strangely effective ‘anarchic complexity’ of the system itself. As Labaree asks, ‘Why ruin a perfect mess?’”
— Nature

"[A] course in American higher-ed history that you can hold in your hand."
— Chronicle of Higher Education

“A Perfect Mess should become a classic, to be put on the same shelf as Frederick Rudolph’s The American College and University: A History (1962), Laurence Veysey’s The Emergence of the American University (1965) and Burton Bledstein’s The Culture of Professionalism: The Middle Class and the Development of Higher Education in America (1976).”
— Times Higher Education

“Unlike several longer histories of higher education, Labaree always keeps the reader oriented as he develops an argument rather than piles on details.… The result is a series of graceful essays reminiscent of Burton Clark, David Riesman, and Martin Trow, three scholars who tackled huge issues in a few pages without oversimplifying or distorting.”
— American Journal of Education