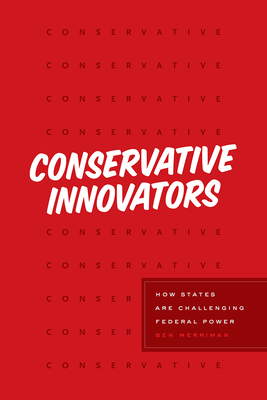 By Ben Merriman
Email or call for price
Ships from Warehouse, Usually in 1-8 Days

As American politics has become increasingly polarized, gridlock at the federal level has led to a greater reliance on state governments to get things done. But this arrangement depends a great deal on state cooperation, and not all state officials have chosen to cooperate. Some have opted for conflict with the federal government.

Conservative Innovators traces the activity of far-right conservatives in Kansas who have in the past decade used the powers of state-level offices to fight federal regulation on a range of topics from gun control to voting processes to Medicaid. Telling their story, Ben Merriman then expands the scope of the book to look at the tactics used by conservative state governments across the country to resist federal regulations, including coordinated lawsuits by state attorneys general, refusals to accept federal funds and spending mandates, and the creation of programs designed to restrict voting rights. Through this combination of state-initiated lawsuits and new administrative practices, these state officials weakened or halted major parts of the Obama Administration’s healthcare, environmental protection, and immigration agendas and eroded federal voting rights protections. Conservative Innovators argues that American federalism is entering a new, conflict-ridden era that will make state governments more important in American life than they have been at any time in the past century.

Ben Merriman is assistant professor at the School of Public Affairs and Administration at the University of Kansas.

"At a time when ideology is in decline but parties are increasingly polarized, it would seem that the idea of state sovereignty is no longer linked to a conservative view of the Constitution but is very much a doctrine that adapts to the political objective of the day. From this point of view, Merriman’s study is not only an investigation of conservative strategies but may constitute one of the first studies of the new ways in which state governments (red or blue) protect their interests vis-a-vis the federal government and, perhaps, a new way to safeguard American federalism."
— Ilaria Di Gioia

"Ben Merriman has written an informed and engaging book on how American federalism is being altered yet again, and how the agents and dynamics influence that change…Overall, this is a valuable book for understanding the movement, tools, and strategies state officials developed to oppose federal policies, and which are currently reshaping American federalism. The writing is clear, concise, and engaging. It is appropriate for scholars in the field, and graduate classes seeking to understand those tools along with the background that led to their development."

“…an incredibly timely look at the punctuated changes that have restructured American politics in recent years…The writing is engaging yet objective, which serves to heighten the intellectual importance of the subject at hand.”

"I find the general gist of the book – focusing on how states have attempted to resist federal government policies that they disagree with – compelling. The examples given, especially with regards to voting rights and the Balanced Budget Compact, effectively illustrate Merriman’s key arguments...this book is very much worth reading and is strongly recommended."
— Benjamin Kassow

"The book’s main strength is the author’s ability to expertly trace the evolution of intergovernmental relations to a complex web of political, legal, and administrative developments and to elegantly situate that analysis within various distinct scholarly literatures…a carefully researched, persuasively argued treatise on an exceptionally important topic."