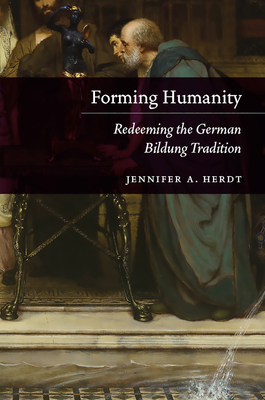 Kant’s proclamation of humankind’s emergence from “self-incurred immaturity” left his contemporaries with a puzzle: What models should we use to sculpt ourselves if we no longer look to divine grace or received authorities?  Deftly uncovering the roots of this question in Rhineland mysticism, Pietist introspection, and the rise of the bildungsroman, Jennifer A. Herdt reveals bildung, or ethical formation, as the key to post-Kantian thought. This was no simple process of secularization, in which human beings took responsibility for something they had earlier left in the hands of God.  Rather, theorists of bildung, from Herder through Goethe to Hegel, championed human agency in self-determination while working out the social and political implications of our creation in the image of God.  While bildung was invoked to justify racism and colonialism by stigmatizing those deemed resistant to self-cultivation, it also nourished ideals of dialogical encounter and mutual recognition.  Herdt reveals how the project of forming humanity lives on in our ongoing efforts to grapple with this complicated legacy.

Jennifer A. Herdt is the Gilbert L. Stark Professor of Christian Ethics at Yale University Divinity School.  Her previous books include Putting On Virtue, also published by the University of Chicago Press.

"In this scrupulous excavation of the traditions of modern Western philosophy, Herdt brings into the light an often-ignored aspect of modern normative theories, namely, the deep-rooted ties between Christian moral theology and the Bildung tradition. . . . Herdt's original contribution is likely to push debates in new directions. Forming Humanity is a splendid resource for those working in 18th- and 19th-century German philosophy, Christian theology, ethics, literature, and education. . . . Summing Up: Essential."
— CHOICE

"In this splendid book, Jennifer Herdt has thus provided a valuable service in tracing the ways in which the concept of Bildung figures in the work of some of the most prominent thinkers of the period. With verve and impressive erudition, Herdt details how the notion of Bildung originated in the German pietist movement in the seventeenth century, and blossomed into a more (though perhaps not entirely) humanistic ideal in the subsequent work of Herder, Wilhelm von Humboldt, Schiller, Goethe, and Hegel."
— Timothy Stoll

“Forming Humanity is an exceptionally nuanced and persuasive account of Christian moral formation in this ostensibly secularizing tradition. By presenting the Bildung tradition as a highly complex engagement with Christianity, the author has made a major contribution to our understanding of it. She has eloquently refuted the secularization thesis and has also demonstrated the variety of ways in which Christianity is both contested and continued, transmuted and transformed in the authors she treats. It is an original and persuasive scholarly account that successfully continues the author’s previous work on divine and human agency while uniting it with an ethics of mutual recognition. This constellation of topics, and the author’s particular version of it, are on the forefront of the best work in Christian ethics today.”
— Gerald McKenny, author of Biotechnology, Human Nature and Christian Ethics

“Herdt’s latest book explores the German Romantics as offering an entirely distinct way of thinking about morality and religious belief in the modern age. Unlike many other forms of ‘modernity critique,’ this project begins not from premises fundamentally antedating modernity but from principles enunciated from within self-consciously modern perspectives. It will alter the way we think about ethical and religious life today, not least by offering one history for many of our more free-floating worries about our condition, and our strategies about the challenges that confront us. In a moment when antimodernism seems theoretically bankrupt but practically pervasive, while questions of modernity are more urgent than ever before, Herdt’s book offers a critical path into the future, beyond nostalgia and resentment.”
— Charles Mathewes, Carolyn M. Barbour Professor of Religious Studies, University of Virginia

“With exemplary scholarship, depth, and clarity Herdt provides a compelling and rich analysis of the Bildung tradition and the interactions of theology, philosophy, and literature that shaped it. And through her constructive intellectual history, Herdt interrogates and opens out theological and historical frameworks for thinking through a central conceptual crisis of our own day: how to imagine and cultivate a sense of shared humanity when the very notion of humanity as a universal moral and political community is at once deeply problematic and urgently needed.”
— Luke Bretherton, Kenan Institute for Ethics, Duke University