Someone: The Pragmatics of Misfit Sexualities, from Colette to Hervé Guibert (Paperback) 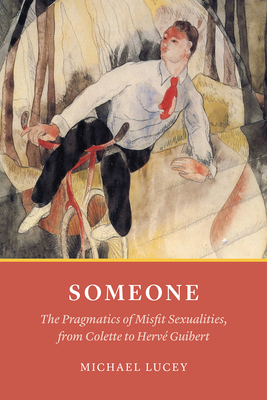 Imagine trying to tell someone something about yourself and your desires for which there are no words. What if the mere attempt at expression was bound to misfire, to efface the truth of that ineluctable something?

In Someone, Michael Lucey considers characters from twentieth-century French literary texts whose sexual forms prove difficult to conceptualize or represent. The characters expressing these “misfit” sexualities gravitate towards same-sex encounters. Yet they differ in subtle but crucial ways from mainstream gay or lesbian identities—whether because of a discordance between gender identity and sexuality, practices specific to a certain place and time, or the fleetingness or non-exclusivity of desire. Investigating works by Simone de Beauvoir, Colette, Jean Genet, and others, Lucey probes both the range of same-sex sexual forms in twentieth-century France and the innovative literary language authors have used to explore these evanescent forms.

As a portrait of fragile sexualities that involve awkward and delicate maneuvers and modes of articulation, Someone reveals just how messy the ways in which we experience and perceive sexuality remain, even to ourselves.

Michael Lucey is professor of comparative literature and French at the University of California, Berkeley. He is the author of many books, including Never Say I: Sexuality and the First Person in Colette, Gide, and Proust.

"Simply spectacular. Lucey proposes a whole new way of problematizing sexual identity and upends in the process many conceptual frameworks that hold sway over contemporary scholarship. His constant, generous attention to the peculiar, the odd, the idiosyncratic that goes hand in hand with the realities of sexual desire makes his work uniquely humane, ethical even. Someone is an outstanding accomplishment."
— David Caron, author of The Nearness of Others: Searching for Tact and Contact in the Age of HIV

“Michael Lucey is far and away the best critic of modern French literature writing today. Someone is a riveting analysis, through Bourdieu, of the relation between sexuality, writing, and the social world. In attentive, rigorously contextualized, and casually assured readings, Lucey invites us to return to Colette, Genet, and Simone de Beauvoir, to Duras, Leduc, and Guibert, and to know them again, as if for the first time.”
— Emma Wilson, University of Cambridge