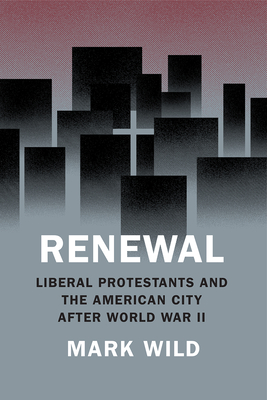 By Mark Wild
Email or call for price
Unavailable

In the decades following World War II, a movement of clergy and laity sought to restore liberal Protestantism to the center of American urban life. Chastened by their failure to avert war and the Holocaust, and troubled by missionaries’ complicity with colonial regimes, they redirected their energies back home.

Renewal explores the rise and fall of this movement, which began as an effort to restore the church’s standing but wound up as nothing less than an openhearted crusade to remake our nation’s cities. These campaigns reached beyond church walls to build or lend a hand to scores of organizations fighting for welfare, social justice, and community empowerment among the increasingly nonwhite urban working class. Church leaders extended their efforts far beyond traditional evangelicalism, often dovetailing with many of the contemporaneous social currents coursing through the nation, including black freedom movements and the War on Poverty.

Renewal illuminates the overlooked story of how religious institutions both shaped and were shaped by postwar urban America.

“Highly recommended. A significant addition to the literature on urban studies. . . . Readers will find Wild’s book a helpful introduction to key figures in American religious history. His prose is accessible and his footnotes are instructive. . . . .Unpacking Wild’s arguments will be well worth the effort.”
— Choice

“Wild’s impressively documented ac­count of the renewalist tradition represents an exciting addition to the new history of the mainline.”
— The Christian Century

“Disciplined, well-researched. . . Mark Wild’s noteworthy Renewal deserves attention on its own, especially as it throws light on how liberal Protestantism held sway over the “climate of opinion” and then lost it. . . . I can think of few better reckonings with the liberal Protestant efforts to invent new ministries and even new theologies to help “wise” leaders not only cope with the challenges of the times but perhaps even to thrive.”
— Martin E. Marty

"A must-read for scholars of American religious history and twentieth-century American social history. Renewal is encyclopedic in its detail, and Wild masterfully creates a cohesive narrative about seemingly disparate aspects of postwar culture."
— Diane Winston

“In this superb book, Wild taps a vast range of primary sources to piece together an eye-opening account of how a dynamic religious movement of urban renewal sought to save the post–World War II American city and mainline church from socioeconomic and spiritual crises of their own making. Cutting from Harlem to Houston, from Detroit to Los Angeles—and across the heart of the twentieth century—Wild elegantly captures the lofty hopes, street-level determination, unavoidable frustrations, and unsolvable paradoxes that shaded second-wave social gospelers’ radical theology and attendant quest to engage and heal the secular urban world. This is a major addition to the history of liberal religion, and political action, in the modern era.”
— Darren Dochuk