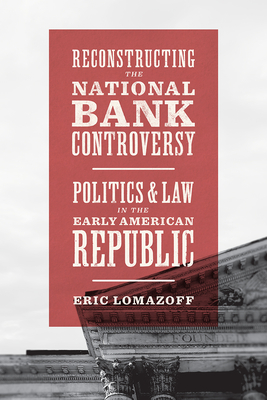 By Eric Lomazoff
Email or call for price
Unavailable

The Bank of the United States sparked several rounds of intense debate over the meaning of the Constitution’s Necessary and Proper Clause, which authorizes the federal government to make laws that are “necessary” for exercising its other powers. Our standard account of the national bank controversy, however, is incomplete. The controversy was much more dynamic than a two-sided debate over a single constitutional provision and was shaped as much by politics as by law.

With Reconstructing the National Bank Controversy, Eric Lomazoff offers a far more robust account of the constitutional politics of national banking between 1791 and 1832. During that time, three forces—changes within the Bank itself, growing tension over federal power within the Republican coalition, and the endurance of monetary turmoil beyond the War of 1812 —drove the development of our first major debate over the scope of federal power at least as much as the formal dimensions of the Constitution or the absence of a shared legal definition for the word “necessary.” These three forces—sometimes alone, sometimes in combination—repeatedly reshaped the terms on which the Bank’s constitutionality was contested. Lomazoff documents how these three dimensions of the polity changed over time and traces the manner in which they periodically led federal officials to adjust their claims about the Bank’s constitutionality. This includes the emergence of the Coinage Clause—which gives Congress power to “coin money, regulate the value thereof”—as a novel justification for the institution. He concludes the book by explaining why a more robust account of the national bank controversy can help us understand the constitutional basis for modern American monetary politics.

“Lomazoff presents a far more nuanced account of the constitutional politics of national banking. He convincingly demonstrates that the constitutional foundations of a national bank shifted over time and that this shift reflected in large part the changing functions of the Bank of the United States. The combination of economic, political, and constitutional development is first-rate, and the results shed new light on an important constitutional controversy.”
— Mark Graber, University of Maryland School of Law

“A complex and sparkling reinterpretation of the debates over the constitutionality of the chartering of a national bank by Congress from its proposal by Alexander Hamilton in 1791 until its eventual dissolution in the 1830s. Whereas previous studies have portrayed this forty-year constitutional drama as a straightforward debate over the Necessary and Proper or Sweeping Clause of the Constitution, Lomazoff busts this pervasive myth by also highlighting the importance of the Coinage Clause. This is an important book.”
— Alan Gibson, California State University, Chico

"Reconstructing the National Bank Controversy weaves together two strands of scholarship that have long been entirely separate...By showing how the issues of banking and monetary policy shaped constitutional arguments, Lomazoff puts the constitutional and economic studies in conversation. Lomazoff therefore fills a significant gap in the scholarship of American legal history and constitutional development...an important and valuable addition to the literature on the fifty-five-year constitutional debate over a national bank."
— David S. Schwartz

"Lomazoff argues that the controversy over the creation of the Bank of the United States was much more dynamic than a debate over the 'necessary and proper' clause of the US Constitution and was shaped as much by politics as by law. He finds that three forces—changes within the Bank itself, growing tension over federal power within the Republican coalition, and the endurance of monetary turmoil beyond theWar of 1812—drove the development of the key early dispute over the scope of federal power."
— Law and Social Inquiry