"Discourse and Truth" and "Parresia" (The Chicago Foucault Project) (Hardcover) 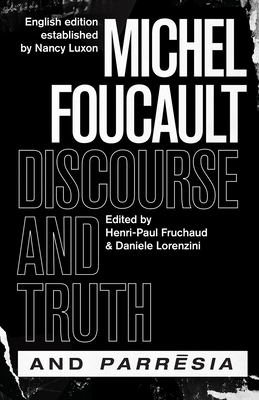 This volume collects a series of lectures given by the renowned French thinker Michel Foucault late in his career. The book is composed of two parts: a talk, Parrēsia, delivered at the University of Grenoble in 1982, and a series of lectures entitled “Discourse and Truth,” given at the University of California, Berkeley in 1983, which appears here for the first time in its full and correct form. Together, they provide an unprecedented account of Foucault’s reading of the Greek concept of parrēsia, often translated as “truth-telling” or “frank speech.” The lectures trace the transformation of this concept across Greek, Roman, and early Christian thought, from its origins in pre-Socratic Greece to its role as a central element of the relationship between teacher and student. In mapping the concept’s history, Foucault’s concern is not to advocate for free speech; rather, his aim is to explore the moral and political position one must occupy in order to take the risk to speak truthfully.

These lectures—carefully edited and including notes and introductory material to fully illuminate Foucault’s insights—are a major addition to Foucault’s English language corpus.

Michel Foucault (1926–84) was one of the most significant social theorists of the twentieth century, his influence extending across many areas of the humanities and social sciences.

Frédéric Gros is a professor at the Université Paris XII. Krzysztof Fijalkowski is senior lecturer in Critical Studies at Norwich University College of the Arts. Michael Richardson is a writer and translator. Together, Fijalkowski and Richardson have translated Refusal of the Shadow, Surrealism against the Current, and Georges Bataille: an Intellectual Biography.

"There are at least two reasons why this is an invaluable book. First, these lectures occurred late in his career (he died in 1984), and the reader is privy to a summation of the most important themes that tied together all of his life’s work, especially the themes of truth and power. Second, his lectures are much clearer to follow than his books, making them an excellent complement to his written work. The inclusion of the question-and-answer sessions not only helps clarify content in the lectures, but demonstrates just how deeply he read ancient texts. A valuable addition not only to Foucault’s thought and critical theory, but also to scholars of philosophy who might otherwise ignore Foucault’s writings. . . . Summing Up: Essential."
— CHOICE

“‘Who is able to tell the truth? About what topic is it important to tell the truth? What are the relations between this activity of telling the truth and exercising power?’ These are the questions that Foucault brilliantly addresses in these formative lectures. Today, when the questions of truth and truth-telling could not be more urgent, this compendium is an indispensable resource, tracing the problems back to the fifth century BCE and recovering the birth of the very notion of the truth-teller. These lectures are unique in offering a concentrated and sharp presentation of Foucault’s history of truth-telling. Expertly edited in English by Nancy Luxon, with a brilliant critical apparatus prepared by Henri-Paul Fruchaud and Daniele Lorenzini, this volume is a necessary companion to Foucault’s final lectures.”
— Bernard E. Harcourt, editor of Michel Foucault, The Punitive Society

“A meticulously curated and definitive edition of Foucault’s Grenoble lecture and of his legendary Berkeley seminars on the courageous practice of free speech, ‘Discourse and Truth’ provides an intimate, often moving glimpse into Foucault’s thought and person at the end of his extraordinary career. Rounding out his writings on the culture of the self in antiquity, and containing his most sustained reflections on the Cynics, the book in fact offers an unexpected genealogy of critique—of the ‘critical attitude’ and the critical bios, or form of life—in the spheres of ethics, politics, and culture, thereby mapping out a tradition that stretches from Greece and Rome to Kant and Nietzsche. The work will be seminal for generations to come. But its lessons could not be more timely, more inspiring, or more urgently needed than at our present moment.”
— James Porter, University of California, Berkeley

“Parresia was Foucault’s last great topic and marks one of his most vital contributions to contemporary philosophical thought. This definitive critical edition of Foucault’s lectures at Grenoble and Berkeley provides an essential guide to the development of his thinking on parresia that will be required reading not only for Foucault scholars but for any philosopher concerned with the relationship of ethics, truth, and power. Fruchaud and Lorenzini, ably supported for this English edition by Nancy Luxon, are owed a debt of gratitude for this superb accomplishment.”
— David Owen, co-author of Prospects for Citizenship

"Foucault's lectures, interviews, and occasional pieces have long been recognized by Foucault scholars to be especially valuable in their clarity and value as supplements to Foucault's major works. . . .This is an important book for Foucault studies, and, given Foucault's influence, more broadly, for the academy."
— Miguel de Beistegui, University of Warwick