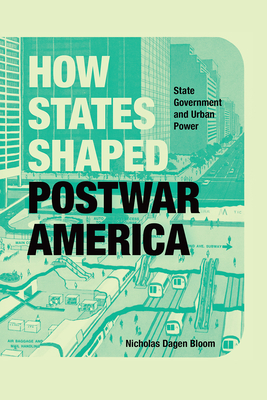 By Nicholas Dagen Bloom
$42.00
Ships from Warehouse, Usually in 1-8 Days

The history of public policy in postwar America tends to fixate on developments at the national level, overlooking the crucial work done by individual states in the 1960s and ’70s. In this book, Nicholas Dagen Bloom demonstrates the significant and enduring impact of activist states in five areas: urban planning and redevelopment, mass transit and highways, higher education, subsidized housing, and the environment. Bloom centers his story on the example set by New York governor Nelson Rockefeller, whose aggressive initiatives on the pressing issues in that period inspired others and led to the establishment of long-lived state polices in an age of decreasing federal power. Metropolitan areas, for both better and worse, changed and operated differently because of sustained state action—How States Shaped Postwar America uncovers the scope of this largely untold story.

Nicholas Dagen Bloom is professor of urban policy and planning at Hunter College.

“Highly recommended. . . Bloom’s carefully crafted work persuasively shows that without the intervention of states, large public systems in fields such as education, transportation, housing, and the environment might not exist or would be unrecognizable today.”
— Choice

“Deeply informative. . . Bloom grasps the nuts and bolts of urban governance down to the last detail; few scholars can match his command of precisely how governing institutions work.”
— Planning Perspectives

“Bloom provides a needed reminder of how significant state governments were to urban development and planning in the mid-twentieth century. . . . The moral of the many stories is that in today's political climate, urban Americans may again need to look to state governments.”
— Planning

“An important read for anyone wishing to expand their understanding of the relationship between cities and state governments.”
— Journal of Urban Affairs

“How States Shaped Postwar America is a welcome addition to a body of scholarship that has, with rare exceptions, almost completely ignored state governments. At its best, the book shows the subtle ways that state officials shaped the postwar metropolis through clever governing techniques like cosigning the debt issues for infrastructure projects, decentralizing the campuses for public universities, and funneling state tax revenues for the maintenance of highway networks.”
— The Gotham Center for New York History

“Extensively researched, How States Shaped Postwar America leaps beyond the history of state and municipal politics to address state governance’s role in urban issues in housing finance, public health, infrastructure, and education. Bloom provides a rich history of state governments’ role in addressing urban challenges. The result is a major contribution to the understanding of state government and its impact on urban policy.”
— Susan M. Wachter

“Bloom makes a forceful argument that scholars of urban history and planning miss important aspects of urban development if they ignore the role played by state governments. How States Shaped Postwar America aims to document that role. In clearly written and very readable prose, Bloom covers an impressive range of policy areas and offers succinct, cogent analysis of policy developments and the state’s role within them.”
— Tracy Steffes

“Bloom’s book breaks new ground and makes a real contribution. It is a needed corrective to historians’ neglect of state government and superbly illuminates the role of the states in metropolitan development.”
— Jon Teaford