Wherever the Sound Takes You: Heroics and Heartbreak in Music Making (Hardcover) 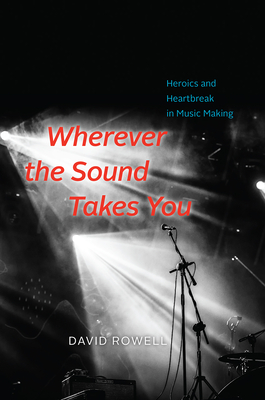 David Rowell is a professional journalist and an impassioned amateur musician. He’s spent decades behind a drum kit, pondering the musical relationship between equipment and emotion. In Wherever the Sound Takes You, he explores the essence of music’s meaning with a vast spectrum of players, trying to understand their connection to their chosen instrument, what they’ve put themselves through for their music, and what they feel when they play.

This wide-ranging and openhearted book blossoms outward from there. Rowell visits clubs, concert halls, street corners, and open mics, traveling from the Rock and Roll Hall of Fame in Cleveland to a death metal festival in Maryland, with stops along the way in the Swiss Alps and Appalachia. His keen reportorial eye treats us to in-depth portraits of musicians from platinum-selling legend Peter Frampton to a devout Christian who spends his days alone in a storage unit bashing away on one of the largest drum sets in the world. Rowell illuminates the feelings that both spur music’s creation and emerge from its performance, as well as the physical instruments that enables their expression. With an uncommon sensitivity and grace, he charts the pleasure and pain of musicians consumed with what they do—as all of us listen in.

David Rowell is deputy editor of the Washington Post Magazine and author of The Train of Small Mercies.

“Quirky and delightful. . . Instead of the usual band profiles or reviews, Wherever the Sound Takes You offers eight elegant essays chronicling the odd, the marginal and the forgotten. . . . Rowell’s book is a  peerless seminar in long-form journalism; the fellow writer or aspirant critic can only marvel at his command of his métier. Each story begins with Rowell setting a hook in the reader as deftly as a fisherman. An indelible lead is inevitably followed by a crafty switch in perspective and a judicious sprinkling of historical context, eventually winding up with a wry, often poignant denouement. All of this is delivered in prose as clear and lively as good conversation. Rowell treats his subjects seriously, as people worthy of having their stories told, which endows them with dignity—and there is nothing poignant in quite the same way as a misfit being treated with dignity. Beneath Rowell’s cool journalistic facade beats the heart of a romantic."
— The Washington Post

“David Rowell is the kind of music fan that scares us musicians. He really gets it, maybe even more than we do. His adventures in music ignite that fascination with ordered sound and the strange people who produce it. Musical instruments too are strange objects. They have a glow about them that derives from the emotional magic of the sounds that they can make. While any inanimate object resonates when struck, some things ring with more charisma than others. Rowell's curations of these special objects and the gifted individuals with the magic power of Excalibur to pull music from them are both travelogues and portraits of some very colorful people."
— Stewart Copeland, Grammy Award-winning drummer for The Police

“A wide-ranging exploration of the hold that music has on so many of us. . . By focusing so narrowly—e.g., on the "hang," an obscure, expensive instrument in Switzerland, the popular rise and decline of the Hammond organ, or the cult appeal of musical aggression known as "grindcore"—Rowell offers revelations that seem universal, if often ineffable. . . . Every story concerns music, but the heart of each is people—the ones who make the music or the instruments and the ones whose lives depend on it. Readers who have had any sort of musical passion should find these stories compelling.”
— Kirkus Reviews

"Too often, reading about people performing music is as unrewarding as reading about people performing sex. Readers generally would prefer to be engaging in the act themselves. Most authors simply cannot capture and convey the passion that makes such acts so vital. David Rowell’s Wherever the Sound Takes You is a happy exception. . . . In engaging essays about mostly obscure musicians—amateur and professional—Rowell explores why some people are driven to make music even if few will ever hear it. It is who they are; it is what they do. They could no more stop playing than stop breathing."
— Washington Independent Review of Books

“In a day when music is respected only if it tops the charts, gets the most clicks, or makes it to number one on American Idol, it’s refreshing to read of music as a human pursuit that can be found anywhere and everywhere. Wherever the Sound Takes You celebrates the middle class of the music-making scene—solitary songwriters and instrument creators, bands that once were stars, and musicians who never were. Yet the passion for musical expression resides in them all, and their stories deserve telling. Rowell does just that, imbuing them equally with respect and dignity.”
— Ashley Kahn, author of A Love Supreme: The Story of John Coltrane’s Signature Album