The Spirit of Controversy: And Other Essays (Oxford World's Classics) (Paperback) 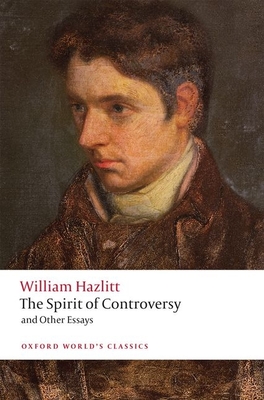 William Hazlitt (1778-1830) is among the most brilliant critics and essayists to have ever written in the English language. Combative and insightful, he was close to two generations of romantic poets. His early friendship with Samuel Taylor Coleridge and William Wordsworth as a young man inspired him to a literary career, but he became disillusioned with them as apostates from the cause of liberty he associated with the French Revolution. As a mature writer, he inspired John Keats and contributed to his thinking about imagination and poetic character. A forceful commentator on contemporary London, he was also a committed radical, whose 'What is the People?' is an almost visionary statement of a new democratic politics. The Spirit of Controversy collects together Hazlitt's most coruscating and influential essays, using versions as they first appeared, including those that originally found their way into print in the cut and thrust of the newspapers and magazines of his day.

William Hazlitt Jon Mee is Professor of Eighteenth Century Studies at the University of York. He was previously Professor of Literature at the Universities of Warwick and Oxford, and Margaret Candfield Fellow in English Literature at University College, Oxford. He has worked at the Australian National University and held visiting professorships at ANU, the University of Chicago and the H. E. Huntington Library James Grande is Lecturer in Eighteenth-Century Literature and Culture at King's College London. He was previously a research assistant on the Leverhulme-funded Godwin Diary Project at Oxford, a British Academy Postdoctoral Fellow at KCL, and a postdoctoral research fellow on the ERC project 'Music in London, 1800-1851'. He is a trustee of Keats-Shelley House in Rome and editor of the Keats-Shelley Review.