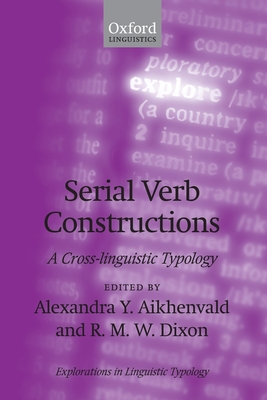 This volume of new work explores the forms and functions of serial verbs. The introduction sets out the cross-linguistic parameters of variation, and the final chapter draws out a set of conclusions. These frame fourteen explorations of serial verb constructions and similar structures in languages from Asia, Africa, North, Central and South America, and the Pacific. Chapters on well-known languages such as Cantonese and Thai are set alongside the languages of small hunter-gatherer and slash-and-burn agriculturalist groups. A serial verb construction (sometimes just called serial verb) is a sequence of verbs which acts together as one. Each describes what can be conceptualized as a single event. They are monoclausal; their intonational properties are those of a monoverbal clause; they generally have just one tense, aspect, mood, and polarity value; and they are an important tool in cognitive packaging of events. Serial verb constructions are a pervasive feature of isolating languages of Asia and West Africa, and are also found in the languages of the Pacific, South, Central and North America, most of them endangered. Serial verbs have been a subject of interest among linguists for some time. This outstanding book is the first to study the phenomenon across languages of different typological and genetic profiles. The authors, all experienced linguistic fieldworkers, follow a unified typological approach and avoid formalisms. The book will interest students, at graduate level and above, of syntax, typology, language universals, information structure, and language contact, in departments of linguistics and anthroplogy.