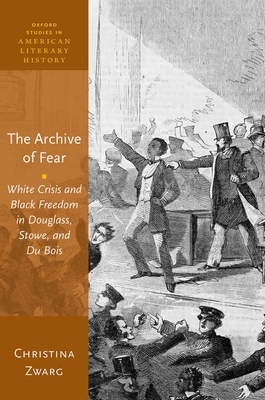 Focusing on U.S. slavery and its aftermath in the nineteenth century, The Archive of Fear explores the traumatic force field that continued to inflect discussions of slavery and abolition both before and after the Civil War. It challenges the long-assumed distinction between psychological and cultural-historical theories of trauma, discovering a virtual dialogue between three central U. S. writers and Sigmund Freud concerning the traumatic response of slavery's perpetrators. A strain of trauma theory and practice comes alive in the temporal and spatial disruptions of New World slavery-and The Archive of Fear shows how key elements of that theory still inform the infrastructure of race relations today. It argues that trauma theory before Freud first involves a return to an overlap between crisis, insurrection, and mesmerism found in the work of Frederick Douglass, Harriet Beecher Stowe, and W. E. B. Du Bois. Mesmer's "crisis state" has long been read as the precursor to hypnosis, the tool Freud famously rejected when he created psychoanalysis. But the story of what was lost to trauma theory when Freud adopted the "talk cure" can be told through cultural disruptions of New World slavery, especially after mesmerism arrived in Saint Domingue where its implication in the Haitian revolution in both reality and fantasy had an impact on the history of emancipation in the United States.

Christina Zwarg, Professor of English, Haverford College, USA Christina Zwarg is a Professor of English at Haverford College where she won a Lindback Award for Distinguished Teaching. After completing a Mellon Faculty Fellowship in the Humanities at Harvard University she published Feminist Conversations: Fuller, Emerson and the Play of Reading, which Choice named an Outstanding Academic Book and Cornell University Press nominated for the MLA First Book Award. Zwarg has published on 19th and 20th century authors and topics in American Literature, American Literary History, Novel, Studies in Romanticism, Poe Studies, and Cultural Critique and Social Text, and her work has been reprinted in Norton Critical Editions. She has also served as a member of the Division of Psychoanalytic Approaches to Literature on the Delegate Assembly of the MLA.