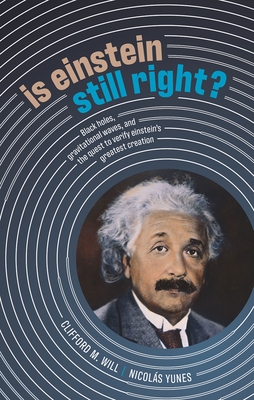 Clifford M. Will is a world-leading theorist in the verification of general relativity, black holes and gravitational waves. He received his Ph.D. in 1971 from Caltech, and has been on the faculty of Stanford, Washington University and the University of Florida, where he is currently Distinguished Professor. Will has written numerous popular articles and four books, including Was Einstein Right? in 1986, which received many accolades. He is a member of the US National Academy of Sciences, a Fellow of the American Physical Society and of the American Academy of Arts and Sciences, and recipient of the American Physical Society's 2021 Einstein Prize. Nicol�s Yunes is Professor of Physics at the University of Illinois at Urbana-Champaign and Founding Director of the Illinois Center for Advanced Studies of the Universe. Before joining Illinois, he was an Associate Professor at Montana State University, where he co-founded the eXtreme Gravity Institute. He is the author of several review articles on tests of General Relativity and over 170 research papers. He is also the producer of the Celebrating Einstein science festival, the Rhythms of the Universe spoken word event, and the Einstein's Gravity Playlist planetarium show. He is a leader in the use of gravitational wave observations to systematically test Einstein's theory of General Relativity, and is an internationally recognized expert in other aspects of gravity, including black holes and neutron stars. He has received the Young Scientist Prize of the International Union of Pure and Applied Physics.