Whitman in Washington: Becoming the National Poet in the Federal City (Hardcover) 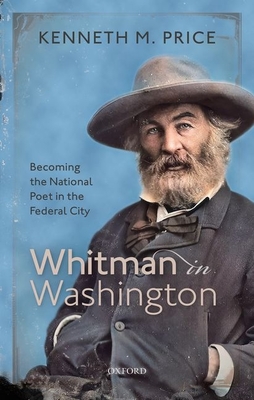 During Walt Whitman's decade in Washington, DC, 1863-1873, he labored intensely, at times seeming to have three lives at once. He wrote the most distinguished journalism of his career; came into his own as a writer of letters; crafted memorable Civil War poetry, Drum-Taps and Sequel to Drum-Taps and later folded it into heavily revised and expanded versions of Leaves of Grass; and produced his searching but also flawed critique of American culture, Democratic Vistas. Whitman's work through the first three editions of Leaves often receives the highest praise, yet his writing in the Washington years is exceptional, too, by any reckoning--and is all the more remarkable given that he also cared for thousands of wounded and sick soldiers in Washington hospitals, serving as an attentive visitor. In addition, he served as a government clerk in various positions, most notably in the attorney general's office when much was accomplished on the road toward a multi-racial democracy including efforts to suppress the Ku Klux Klan, and much was also missed (both by the attorney general's office and by Whitman) in the efforts to advance a more just and vibrant union. This book analyses Whitman's integrated life, writings, and government work in his urban context to re-evaluate the writer and the nation's capital in a time of transformation. Drawing on an expanded Whitman corpus, including nearly 3,000 Whitman documents the author recently identified in the National Archives, Whitman in Washington demonstrates that the power of Whitman's Civil War and Reconstruction writing emerges, more fully than we could ever before have imagined, from his intimate knowledge of the capital city, its bureaucracies, and its tumultuous post-war history.

Kenneth M. Price, Hillegass University Professor of American Literature, University of Nebraska-Lincoln Kenneth M. Price, Hillegass University Professor at the University of Nebraska-Lincoln, has co-directed The Walt Whitman Archive since 1995. He is a founding co-director of the Center for Digital Research in the Humanities at Nebraska. His previous books include Whitman and Tradition: The Poet in His Century (Yale, 1990); To Walt Whitman, America (North Carolina, 2004) and, with co-author Ed Folsom, Re-Scripting Walt Whitman (Blackwell, 2005). He has served as President of both the Society for Textual Scholarship and the Association for Documentary Editing.