Wordsworth, Coleridge, and 'The Language of the Heavens' (Oxford English Monographs) (Hardcover) 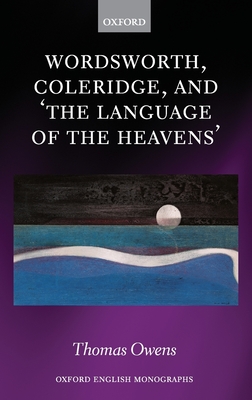 Thomas Owens explores some of the exultant visions inspired by Wordsworth's and Coleridge's close scrutiny of the night sky, the natural world, and the domains of science. He examines a set of scientific patterns drawn from natural, geometric, celestial, and astronomical sources which Wordsworth and Coleridge used to express their ideas about poetry, religion, literary criticism, and philosophy, and establishes the central importance of analogy in their creative thinking. Analogies prompted the poets' imaginings in geometry and cartography, in nature (representations of the moon) and natural history (studies of spider-webs, streams, and dew), in calculus and conical refraction, and in the discovery of infra-red and ultraviolet light. Although this is primarily a study of the patterns which inspired their writing, the findings overturn the prevalent critical consensus that Wordsworth and Coleridge did not have the access, interest, or capacity to understand the latest developments
in nineteenth-century astronomy and mathematics, which they did in fact possess. Wordsworth, Coleridge, and 'the language of the heavens' reinstates many relationships which the poets had with scientists and their sources. Most significantly, the book illustrates that these sources are not simply another context or historical lens through which to engage with Wordsworth's and Coleridge's work but are instead a controlling device of the symbolic imagination. Exploring the structures behind Wordsworth's and Coleridge's poems and metaphysics stakes out a return to the evidence of the Romantic imagination, not for its own sake, but in order to reveal that their analogical configuration of the world provided them with a scaffold for thinking, an intellectual orrery which ordered artistic consciousness and which they never abandoned.

Thomas Owens, University College London Thomas Owens studied for his undergraduate MA at the University of St Andrews, before completing an MSt and DPhil at St John's College, Oxford. Subsequently, he held a Junior Research Fellowship at Churchill College, Cambridge, before arriving at UCL as a Teaching Fellow in eighteenth- and nineteenth-century English literature in September 2017, where he currently works. From April-October 2018 he held a Postdoctoral Visiting Research Fellowship at the Institute of English Studies, School of Advanced Study.