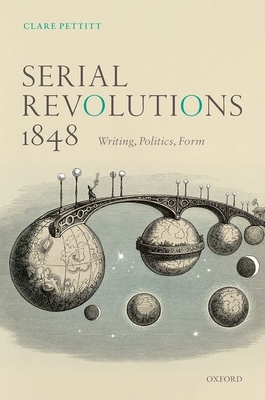 1848 was a pivotal moment not only in Europe but in much of the rest of the world too. Marx's scornful dismissal of the revolutions created a historiography for 1848 that has persisted for more than 150 years. Serial Revolutions 1848 shows how, far from being the failure that Karl Marx claimed
them to be, the revolutions of 1848 were a powerful response to the political failure of governments across Europe to care for their people. Crucially, this revolutionary response was the result of new forms of representation and mediation: until the ragged and the angry could see themselves
represented, and represented as a serial phenomenon, such a political consciousness was impossible. By the 1840s, the developments in printing, transport, and distribution discussed in Clare Pettitt's Serial Forms: The Unfinished Project of Modernity, 1815-1848 (Oxford University Press, 2020) had
made the social visible in an unprecedented way. This print revolution led to a series of real and bloody revolutions in the streets of European cities. The revolutionaries of 1848 had the temerity to imagine universal human rights and a world in which everyone could live without fear, hunger, or
humiliation. If looked at like this, the events of 1848 do not seem such 'poor incidents', as Marx described them, nor such an embarrassing failure after all. Returning to 1848, we can choose to look back on that 'springtime of the peoples' as a moment of tragi-comic failure, obliterated by the brutalities that followed, or we can look again, and see it as a proleptic moment of stored potential, an extraordinary series of events that generated
long-distance and sustainable ideas about global citizenship, international co-operation, and a shared and common humanity which have not yet been fully understood or realised.

Clare Pettitt, Professor of Nineteenth-Century Literature and Culture, King's College London Clare Pettitt is Professor of Nineteenth-Century Literature and Culture at King's College London. She is author of Patent Inventions: Intellectual Property and the Victorian Novel (OUP, 2004) and 'Dr. Livingstone, I Presume?': Missionaries, Journalists, Explorers and Empire (Profile/Harvard, 2007).In June 2020, she published Serial Forms: The Unfinished Project of Modernity, 1815-1848 with Oxford University Press, which is the first volume of a three-volume reassessment of the impact of the media on political and literary culture from 1815 to 1918. The second part, entitled Serial Revolutions1848: Writing, Politics, Form, shows how press reports and literary witness accounts of the 1848 European revolutions were crucial to creating international ideas of global citizenship and human rights. The third and final part will track the emergence of the digital and its effects on literaryculture and imperial and racial identities.