Against Marriage: An Egalitarian Defense of the Marriage-Free State (Oxford Political Theory) (Hardcover) 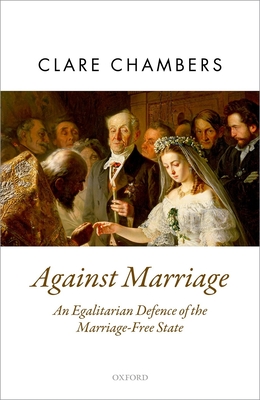 Against Marriage argues that marriage violates both equality and liberty and should not be recognized by the state. Clare Chambers shows how feminist and liberal principles require creation of a marriage-free state: one in which private marriages, whether religious or secular, would have no
legal status. Part One makes the case against marriage. Chambers investigates the critique of marriage that has developed within feminist and liberal theory. Feminists have long argued that state-recognised marriage is a violation of equality. Chambers endorses the feminist view and argues, in contrast to recent
egalitarian pro-marriage movements, that same-sex marriage is not enough to make marriage equal. The egalitarian case against marriage is the most fundamental argument of Against Marriage. But Chambers also argues that state-recognised marriage violates liberty, including the political liberal
version of liberty that is based on neutrality between conceptions of the good. Part Two sets out the case for the marriage-free state. Chambers criticizes recent arguments that traditional marriage should be replaced with either a reformed version of marriage, such as civil partnership, or a purely contractual model of relationship regulation. She then sets out a new model for
the legal regulation of personal relationships. Instead of regulating by status, the state should regulate relationships according to the practices they involve. Instead of regulating relationships holistically, assuming that relationship practices are bundled together in one significant
relationship, the marriage-free state regulates practices on a piecemeal basis. The marriage-free state thus employs piecemeal, practice-based regulation. It may regulate private marriages, including religious marriages, so as to protect equality. But it takes no interest in defining or protecting
the meaning of marriage.