Ukraine: What Everyone Needs to Know(r) (Paperback) 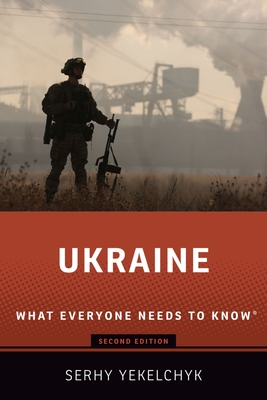 Conventional wisdom dictates that Ukraine's political crises can be traced to the linguistic differences and divided political loyalties that have long fractured the country. However, this theory obscures the true significance of Ukraine's recent civic revolution and the conflict's crucial
international dimension. The 2013-14 Ukrainian revolution presented authoritarian powers in Russia with both a democratic and a geopolitical challenge. In reality, political conflict in Ukraine is reflective of global discord, stemming from differing views on state power, civil society, and
democracy. Ukraine's sudden prominence in American politics has compounded an already-widespread misunderstanding of what is actually happening in the nation. In the American media, Ukraine has come to signify an inherently corrupt place, rather than a real country struggling in the face of great challenges.
Ukraine: What Everyone Needs to Know(R) is an updated edition of Serhy Yekelchyk's 2015 publication, The Conflict in Ukraine. It addresses Ukraine's relations with the West, particularly the United States, from the perspective of Ukrainians. The book explains how independent Ukraine fell victim to
crony capitalism, how its people rebelled twice in the last two decades in the name of democracy and against corruption, and why Russia reacted so aggressively to the strivings of Ukrainians. Additionally, it looks at what we know about alleged Ukrainian interference in the 2016 US presidential
election, the factors behind the stunning electoral victory of the political novice Volodymyr Zelensky, and the ways in which the events leading to the impeachment proceedings against President Donald Trump have changed the Russia-Ukraine-US relationship. This volume is essential reading for anyone who wants to understand the forces that have shaped contemporary politics in this increasingly important part of Europe, as well as the international background of the impeachment proceedings in the US.

Serhy Yekelchyk is Professor of History and Slavic Studies at the University of Victoria. He has published widely on modern Ukrainian history and Russian-Ukrainian relations.