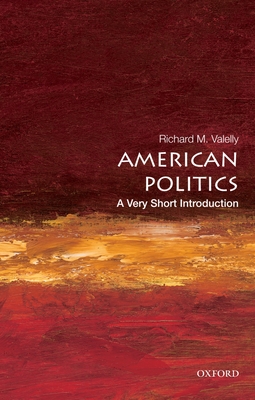 American politics seems to grow more contentious and complicated by the day, and whether American democracy works well is hotly debated. Amidst all this roiling partisan argument and confusing claims and counterclaims, there has never been a greater need for an impartial primer on the basics of the American political system. This Very Short Introduction gives readers a concise, accessible, and sophisticated overview of the vital elements of American democracy, emphasizing both how these elements function, their historical origins, and how they have evolved into their present forms. Richard Valelly covers all facets of America's political system: the bicameral Congress and the place of the filibuster, the legislative-executive process, the role of the Supreme Court, political parties and democratic choice, bureaucracy, the partisan revival, and the political economy. He offers as well an original analysis of the evolution of the American presidency and a fascinating chapter on the effects of public polling on political decision-making and voter representation. Valelly shows that the American political system is, and always has been, very much a work in progress--unfolding within, and also constantly updating, an eighteenth-century constitutional framework. In a refreshingly balanced and judicious
assessment, he explores the strengths of American democracy while candidly acknowledging both gaps in representation and the increasing income inequality have sparked protest and intense public discussion. Finally, Valelly considers the remarkable persistence, for more than two centuries, of the basic constitutional forms established in 1787, despite the dramatic social changes that have reshaped virtually all aspects of American life. For anyone wishing to understand the nuts and bolts of how our political system works--and sometimes fails to work--this Very Short Introduction is the very best place to start. About the Series: Oxford's Very Short Introductions series offers concise and original introductions to a wide range of subjects--from Islam to Sociology, Politics to Classics, Literary Theory to History, and Archaeology to the Bible. Not simply a textbook of definitions, each volume in this series provides trenchant and provocative--yet always balanced and complete--discussions of the central issues in a given discipline or field. Every Very Short Introduction gives a readable evolution of the subject in question, demonstrating how the subject has developed and how it has influenced society. Eventually, the series will encompass every major academic discipline, offering all students an accessible and abundant reference library. Whatever the area of study that one deems important or appealing, whatever the topic that fascinates the general reader, the Very Short Introductions series has a handy and affordable guide that will likely prove indispensable.

Richard Valelly is Claude C. Smith '14 Professor of Political Science at Swarthmore College. His publications include Princeton Readings in American Politics (2009), The Two Reconstructions: The Struggle for Black Enfranchisement (2004), which won several prizes, and Radicalism in the States: The Minnesota Farmer-Labor Party and the American Political Economy (1989).