Speak of the Devil: How the Satanic Temple Is Changing the Way We Talk about Religion (Hardcover) 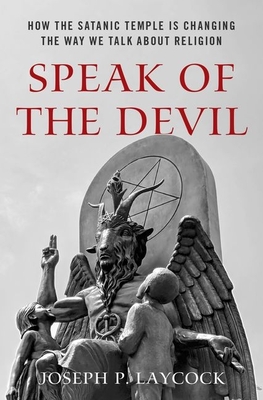 In 2013, when the state of Oklahoma erected a statue of the Ten Commandments on the grounds of the state capitol, a group calling themselves The Satanic Temple applied to erect a statue of Baphomet alongside the Judeo-Christian tablets. Since that time, The Satanic Temple has become a regular voice in national conversations about religious freedom, disestablishment, and government overreach. In addition to petitioning for Baphomet to appear alongside another monument of the Ten Commandments in Arkansas, the group has launched campaigns to include Satanic nativity scenes on government property in Florida, Michigan, and Indiana, offer Satanic prayers at a high school football game in Seattle, and create After School Satan programs in elementary schools that host Christian extracurricular programs. Since their 2012 founding, The Satanic Temple has established 19 chapters and now claims 100,000 supporters. Is this just a political group perpetuating a series of stunts? Or is it
a sincere religious movement? Speak of the Devil is the first book-length study of The Satanic Temple. Joseph Laycock, a scholar of new religious movements, contends that the emergence of political Satanism marks a significant moment in American religious history that will have a lasting impact on how Americans frame debates about religious freedom. Though the group gained attention for its strategic deployment of outrage, it claims to have developed beyond politics into a genuine religious movement. Equal parts history and ethnography, Speak of the Devil is Laycock's attempt to take seriously The Satanic Temple's work to redefine religion, the nature of pluralism and religious tolerance, and what religious freedom means in America.

Joseph P. Laycock is an assistant professor of religious studies at Texas State University. His work explores American religious history and new religious movements. He is also a co-editor of the journal Nova Religio.