On Being and Becoming: An Existentialist Approach to Life (Hardcover) 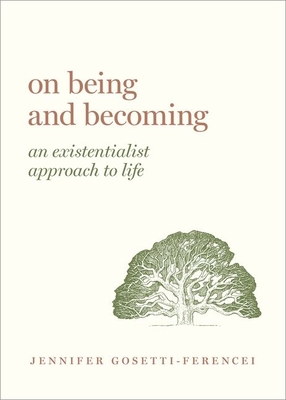 While existentialism has long been associated with Parisian Left Bank philosophers sipping cocktails in smoke-filled caf's, or with a brooding, angst-filled outlook on life, Gosetti-Ferencei shows how vital and heterogeneous the movement really was. In this concise, accessible book, Gosetti-Ferencei offers a new vision of existentialism. As she lucidly demonstrates, existentialism is a rich and diverse philosophy that encourages meaningful engagement with the world around us, offering a host of fascinating concepts that pertain to life as we
experience it. The movement was as heterogeneous as it is now misunderstood, influenced by jazz music, involving diverse thinkers from around the world, challenging received ideas about the meaning of human existence. Part of the difficulty in defining existentialism is that it was never a unified
philosophy, but came to identify a set of shared concerns about the meaning and possibility of human freedom, as it may be expressed in authentic choices, actions, and projects. Existentialists all explored how, in the absence of traditional reassurances about the meaning of life, we may transcend
our present circumstances, and give our situation new meaning. With existentialism, concrete, lived experience of the single individual emerged from the shadow of abstract systems and long-defended traditions, and became subject-matter in its own right for philosophical inquiry. Far from
solipsistic, Gosetti-Ferencei shows that existentialist attention to the human self can be intertwined with ways of conceiving the world, our being with others, the earth, and the encompassing concept of being. Fully appreciating what existentialism has to offer requires recognizing the rich diversity of its prospects, which involve not only anxiety, absurdity, awareness of death and the loss of religious meaning, but also hope, the striving for happiness, and a sense of the transcendent. On Being and
Becoming unpacks this philosophical movement's insights, and reveals how its core ideas promote creative responses to the question of life's meaning.