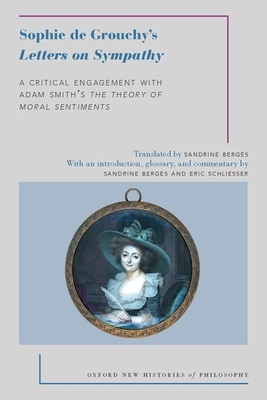 Adam Smith, in his The Theory of Moral Sentiments, largely left his readers to develop his argument's full implications. Many philosophers famously did so, including Mary Wollstonecraft, Thomas Paine, and John Millar, among others, but less known are Sophie de Grouchy's own contributions,
presented here alone in translation. Grouchy (1764-1822) published her Letters on Sympathy in 1798 together with her French translation of The Theory of Moral Sentiments. While Grouchy's Letters mainly engage critically with Smith's philosophical analysis of sympathy, they offer valuable
perspectives and original thoughts about the relationship of emotional and moral development to legal, economic, and political reform. In particular, Grouchy sought to understand how the mechanisms of sympathy could help the development of new social and political institutions after the revolution.
Her Letters further contain profound reflections on the dangers of demagoguery, the nature of tragedy, and the roles of love and friendship. Though ostensibly a commentary on Smith, the Letters stand in their own right as significant and original contributions to political philosophy. This new translation by Sandrine Berg's of a text by a forgotten female philosopher illuminates new inroads to Enlightenment and feminist thought and
reveals insights that were far ahead of their time. The volume includes a critical introduction, explanatory notes, and a glossary of terms to provide critical and historical analysis for the novice reader.