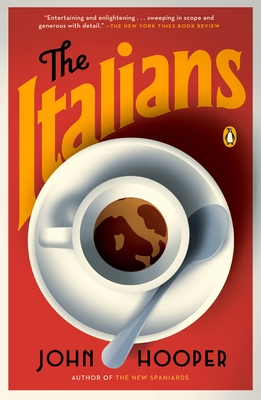 How did a nation that spawned the Renaissance also produce the Mafia? And why does Italian have twelve words for coat hanger but none for hangover?

John Hooper’s entertaining and perceptive new book is the ideal companion for anyone seeking to understand contemporary Italy and the unique character of the Italians. Fifteen years as a foreign correspondent based in Rome have sharpened Hooper’s observations, and he looks at the facts that lie behind the stereotypes, shedding new light on everything from the Italians’ bewildering politics to their love of life and beauty. Hooper persuasively demonstrates the impact of geography, history, and tradition on many aspects of Italian life, including football and Freemasonry, sex, food, and opera. Brimming with the kind of fascinating—and often hilarious—insights unavailable in guidebooks, The Italians will surprise even the most die-hard Italophile.

John Hooper is the Italy correspondent of the Economist and a contributing editor of the Guardian (London). He has also written or broadcast for the BBC, NBC, and Reuters. His book The Spaniards won the Allen Lane Award and was revised and updated as The New Spaniards in 1995 and 2006.

“A compact but comprehensive study of the people of Italy. The author puts his finger on the vast diversity of the country through his descriptions of their linguistics, cultures, foods, economies and even journalism. What's not to love? A thoroughly researched, well-written, ageless narrative of a fascinating people.”—Kirkus, starred review

“A sophisticated portrait of the Italians at their best and their worst: charming, imaginative, generous, full of life but also unreliable, more or less corrupt and often downright infuriating. I found myself laughing out loud at some of the humorous twists Mr. Hooper has put to his very perceptive analyses. A worthy and long-overdue successor to Luigi Barzini’s classic The Italians."—Andrea Di Robilant, author of A Venetian Affair

“John Hooper takes his readers deep into the Italian labyrinth. And they come out alive, with a smile on their faces! A remarkable achievement.”—Beppe Severgnini, author of Ciao America and La Bella Figura

“In vivid and fluid prose, John Hooper has written an indispensible guide to life in Italy past and present. His incisive portrait, at turns hard-hitting and affectionate, reveals the Italians in all their complexity, from their dolce vita and transcendent art to their gut-wrenching social and political struggles.”—Joseph Luzzi, author of My Two Italies

“Thanks to his great curiosity, his splendid comparative and analytical perspective, and a fine eye for telling details, John Hooper gets under the skin of a fascinating people in a remarkable and compelling way.”—Bill Emmott, co-author of the documentary about Italy “Girlfriend in a Coma”

“Here is the history, passion, culture, and contradictions that make Italy and Italians so fascinating. John Hooper's The Italians is as enjoyable to read as taking a trip to my favorite country!” —Ann Hood, author of An Italian Wife