How Does It Feel to Be a Problem?: Being Young and Arab in America (Paperback) 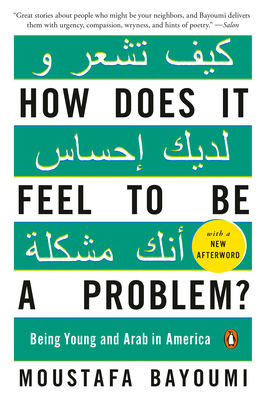 “Bayoumi offers a revealing portrait of life for people who are often scrutinized but seldom heard from.” —Booklist (starred review)

“Wholly intelligent and sensitively-drawn, How Does It Feel to Be a Problem? is an important investigation into the hearts and minds of young Arab-Americans. This significant and eminently readable work breaks through preconceptions and delivers a fresh take on a unique and vital community. Moustafa Bayoumi's voice is refreshingly frank, personable, and true.” —Diana Abu-Jaber, author of Origin, Crescent, and The Language of Baklava

Just over a century ago , W.E.B. Du Bois posed a probing question in his classic The Souls of Black Folk: How does it feel to be a problem? Now, Moustafa Bayoumi asks the same about America's new "problem"-Arab- and Muslim-Americans. Bayoumi takes readers into the lives of seven twenty-somethings living in Brooklyn, home to the largest Arab-American population in the United States. He moves beyond stereotypes and clichés to reveal their often unseen struggles, from being subjected to government surveillance to the indignities of workplace discrimination. Through it all, these young men and women persevere through triumphs and setbacks as they help weave the tapestry of a new society that is, at its heart, purely American.

Moustafa Bayoumi was born in Zürich, Switzerland, and raised in Canada. He earned his Ph.D. at Columbia University and is Professor of English at Brooklyn College, the City University of New York. He is the author of This Muslim American Life: Dispatches from the War on Terror, which was chosen as a Best Book of 2015 by The Progressive magazine and awarded the Arab American Book Award for Non-Fiction. He edited Midnight on the Mavi Marmara: the Attack on the Gaza Freedom Flotilla and How It Changed the Course of the Israel/Palestine Conflict and is co-editor of The Edward Said Reader. How Does It Feel To Be a Problem? won an American Book Award and the Arab American Book Award for Non-Fiction. Bayoumi is also a frequent contributor to The Guardian, and his writing has appeared in The Nation, The New York Times Magazine, New York Magazine, The National, CNN.com, The London Review of Books, The Chronicle of Higher Education, and many other publications. He is the recipient of two excellence in teaching awards, a 2011 Culture and Achievement Award from the Network of Arab American Professionals, and a 2016 Pathmaker to Peace Award from the organization Brooklyn for Peace. In 2015, he was awarded the honorary degree of Doctor of Humane Letters by Southern Vermont College. He lives in Brooklyn, New York.

“As Moustafa Bayoumi argues in his provocative investigation, young Arab-Americans are still struggling to define their identities in a hostile environment and to cope with the governments distrust . . . despite what they have suffered and continue to endure, Bayoumi and his interview subjects still hope that America is a place where they can live in peace—and find justice, fairness, and freedom.” —Francine Prose, O Magazine

“In How Does It Feel to Be a Problem? Bayoumi . . . gives twenty-something Arab-Americans the chance to talk about their victories and defeats.” —The Wall Street Journal

“These are great stories about people who might be your neighbors, and Bayoumi delivers them with urgency, compassion, wryness and hints of poetry. You may walk away from the book with a much greater understanding of Arab-American life, but you'll feel that's simply because you've hung out with Bayoumi and friends, snarfing down Dunkin' Donuts or puffing on hookahs, talking about vital issues.” —Salon.com

“Moustafa Bayoumi's How Does It Feel to Be a Problem? has an intimate feel, as the author listens closely to the dreams and realities of seven young Arabs living in post-9/11 America.” —Dallas Morning News

“An indispensable guide . . . a well-written book on a subject that is often overlooked or treated as a side note to bigger problems, like the occupation of Iraq, Israeli aggression and civil liberties.” —The Arab American News

“Bayoumi succeeds in presenting the reader with more than just a glimpse into these lives. One is right there with Rasha, a Palestinian-American teenager, who was detained along with the rest of her family without reason following 9/11. This first story is the most chilling as one can sense the frustration and dread emanating from Rasha’s story. I have heard about things like this happening but to actually read about 19-year-old Rasha and what she and her entire family had to endure is something else. Bayoumi’s decision to talk to Arabs from Brooklyn was a wise one as these stories are reflections from a group of people that not only have bared the brunt of discrimination, but call New York City their home and therefore, 9/11 affected them as it did most New Yorkers. By providing a book accessible to the masses, Bayoumi gives the Arab problem a very human face that other Americans can empathize with.” —MediaandIslam.com

“Bayoumi offers a revealing portrait of life for people who are often scrutinized but seldom heard from.” —Booklist (starred review)

“In many ways, [Bayoumi’s] absorbing and affectionate book is a quintessentially American picture of 21st century citizens ‘absorbing and refracting all the ethnicities and histories surrounding [them].’ However, the testimonies from these young adults—summary seizures from their homes, harassment from strangers, being fired for having an Arab or Muslim name—have a weight and a sorrow that is ‘often invisible to the general public.’” —Publishers Weekly (starred review)

“The book’s title derives from a question posed by W.E.B. Du Bois in The Souls of Black Folk, and given the burgeoning of anti-Arab, anti-Muslim sentiments since 9/11, the author’s appropriation of it seems apt. [Bayoumi] poignantly portrays young people coming of age at a time when ‘informants and spies are regular topics of conversation . . . friendships are tested, trust disappears.’” —Kirkus Reviews

“Wholly intelligent and sensitively-drawn, How Does It Feel to Be a Problem? is an important investigation into the hearts and minds of young Arab-Americans. This significant and eminently readable work breaks through preconceptions and delivers a fresh take on a unique and vital community. Moustafa Bayoumi's voice is refreshingly frank, personable, and true.” —Diana Abu-Jaber, author of Origin, Crescent, and The Language of Baklava

“In relating the gripping personal stories of seven young Arab and Muslim Americans from Brooklyn in How Does it Feel to be a Problem?, Moustafa Bayoumi reveals the feelings and frustrations of the current era's scapegoats, who can be demonized, profiled, and reviled without fear of sanction. His book shows both the dimensions of this new problem for American society, and the hopeful signs that this problem too can be overcome.” —Rashid Khalidi, Edward Said Professor of Arab Studies, Columbia University and author of The Iron Cage

“Suspenseful storytelling and rich detail make How Does It Feel to Be a Problem? required reading for Americans yearning for knowledge about Islam and their Muslim neighbors in the United States. In a series of fascinating narratives about the horrors and conflicts young Muslim-Americans faced after 9/11, Moustafa Bayoumi has written a work that is passionate, yet measured, humorous, and above all enlightening.” —Geneive Abdo, author of Mecca and Main Street: Muslim Life in America After 9/11

“With deft prose, acute insight and extensive reporting, Moustafa Bayoumi has produced truly engrossing portraits of young Muslim Americans about whom we usually hear only empty polemics. With a light touch, he gives voice to people who are referred to often and heard from rarely. The result is a sense of the tentative resistance of a besieged generation, as well as their determination to force America to be true to its promise even if it means confronting prejudice in its practice.”
—Gary Younge, author of Stranger in a Strange Land: Encounters in the Disunited States and No Place Like Home