The Complete Poems and Translations (Paperback) 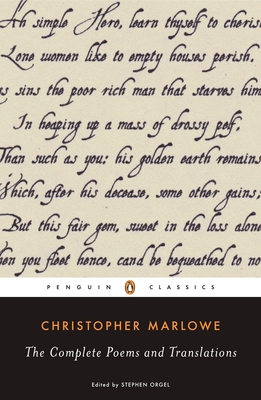 Though best known for his plays--and for courting danger as a homosexual, a spy, and an outspoken atheist--Christopher Marlowe was also an accomplished and celebrated poet. This long-awaited updated and revised edition of his poems and translations contains his complete lyric works--from his translations of Ovidian elegies to his most famous poem, "The Passionate Shepherd to His Love," to the impressive epic mythological poem "Hero and Leander."

Christopher Marlowe (1564-1593) was born in Canterbury the year of Shakespeare’s birth. Like Shakespeare, he was of a prosperous middle-class family, but unlike Shakespeare he went to a university, Corpus Christi College, Cambridge, where he received the bachelor’s degree in 1584 and the master’s degree in 1587. The terms of his scholarship implied that he was preparing for the clergy but he did not become a clergyman. Shortly before he received his M.A. the University seems to have wished to withhold it, apparently suspecting him of conversion to Roman Catholicism, but the Queen’s Privy Council intervened on his behalf, stating that he “had done her majesty good service” and had been employed “in matters touching the benefit of the country.” His precise service is unknown. After Cambridge, Marlowe went to London, where he apparently lived a turbulent life (he had two brushes with the law and was said to be disreputable) while pursuing a career as a dramatist. He wrote seven plays--the dates of which are uncertain--before he was yet again in legal difficulties: he was arrested in 1593, accused of atheism. He was not imprisoned, and before his case could be decided he was dead, having been stabbed in a tavern while quarreling over the bill.