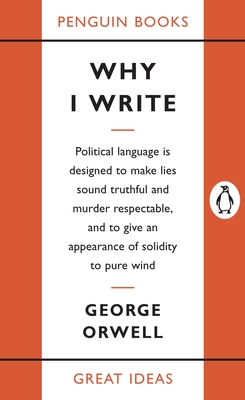 A selection of George Orwell's politically charged essays on language and writing that give context to his dystopian classic, 1984

Throughout history, some books have changed the world. They have transformed the way we see ourselves—and each other. They have inspired debate, dissent, war and revolution. They have enlightened, outraged, provoked and comforted. They have enriched lives—and destroyed them.

Now, Penguin brings you the works of the great thinkers, pioneers, radicals and visionaries whose ideas shook civilization, and helped make us who we are. Penguin's Great Ideas series features twelve groundbreaking works by some of history's most prodigious thinkers, and each volume is beautifully packaged with a unique type-drive design that highlights the bookmaker's art. Offering great literature in great packages at great prices, this series is ideal for those readers who want to explore and savor the Great Ideas that have shaped the world.

Whether puncturing the lies of politicians, wittily dissecting the English character or telling unpalatable truths about war, Orwell's timeless, uncompromising essays are more relevant, entertaining and essential than ever in today's era of spin.

Eric Arthur Blair (George Orwell) was born in 1903 in India, where his father worked for the Civil Service. The family moved to England in 1907 and in 1917 Orwell entered Eton, where he contributed regularly to the various college magazines. From 1922 to 1927 he served with the Indian Imperial Police in Burma, an experience that inspired his first novel, Burmese Days (1934). Several years of poverty followed. He lived in Paris for two years before returning to England, where he worked successively as a private tutor, schoolteacher and bookshop assistant, and contributed reviews and articles to a number of periodicals. Down and Out in Paris and London was published in 1933.

In 1936, he was commissioned by Victor Gollancz to visit areas of mass unemployment in Lancashire and Yorkshire, and The Road to Wigan Pier (1937) is a powerful description of the poverty he saw there. At the end of 1936 Orwell went to Spain to fight for the Republicans and was wounded, and Homage to Catalonia is his account of the civil war. He was admitted to a sanatorium in 1938 and from then on was never fully fit. He spent six months in Morocco and there wrote Coming Up for Air. During the Second World War he served in the Home Guard and worked for the BBC Eastern Service from 1941 to 1943. As literary editor of the Tribune he contributed a regular page of political and literary commentary, and he also wrote for the Observer and later for the Manchester Evening News. His unique political allegory, Animal Farm, was published in 1945, and it was this novel, together with Nineteen Eighty-Four (1949), which brought him world-wide fame.

George Orwell died in London in January 1950. A few days before, Desmond MacCarthy had sent him a message of greeting in which he wrote: 'You have made an indelible mark on English literature . . . you are among the few memorable writers of your generation.'