The Twilight of the Idols and the Anti-Christ: or How to Philosophize with a Hammer (Paperback) 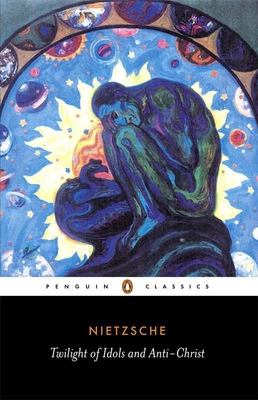 'One must be superior to mankind in force, in loftiness of soul—in contempt’

In these two devastating works, Nietzsche offers a sustained and often vitriolic attack on the morality and the beliefs of his time, in particular those of Hegel, Kant and Schopenhaur. Twilight of the Idols is a ‘grand declaration of war’ on reason, psychology and theology that combines highly charged personal attacks on his contemporaries with a lightning tour of his own philosophy. It also paves the way for The Anti-Christ, Nietzche’s final assault on institutional Christianity, in which he identifies himself with the ‘Dionysian’ artist and confronts Christ; the only opponent he feels worthy of him.

In his introduction Michael Tanner discussed the themes of Nietzche’s argument and places the works in their historical and philosophical context.

The philosopher Friedrich Nietzsche was born in Prussia in 1844. After the death of his father, a Lutheran minister, Nietzsche was raised from the age of five by his mother in a household of women. In 1869 he was appointed Professor of Classical Philology at the University of Basel, where he taught until 1879 when poor health forced him to retire. He never recovered from a nervous breakdown in 1889 and died eleven years later. Known for saying that “god is dead,” Nietzsche propounded his metaphysical construct of the superiority of the disciplined individual (superman) living in the present over traditional values derived from Christianity and its emphasis on heavenly rewards. His ideas were appropriated by the Fascists, who turned his theories into social realities that he had never intended.
R. J. Hollingdale has translated eleven of Nietzsche’s books and published two books about him. He has also translated works by, among others, Schopenhauer, Goethe, E. T. A. Hoffmann, Lichtenberg and Theodor Fontane, many of these for the Penguin Classics. He is Honorary President of the British Nietzsche Society, and was for the Australian academic year 1991 Visiting Fellow at Trinity College, Melbourne.