Just for Fun: The Story of an Accidental Revolutionary (Paperback) 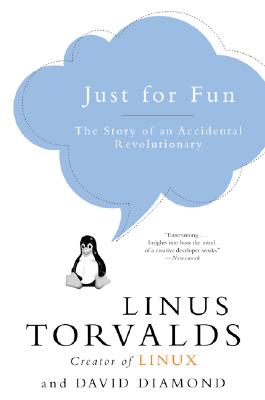 Once upon a time Linus Torvalds was a skinny unknown, just another nerdy Helsinki techie who had been fooling around with computers since childhood. Then he wrote a groundbreaking operating system and distributed it via the Internet -- for free. Today Torvalds is an international folk hero. And his creation LINUX is used by over 12 million people as well as by companies such as IBM.

Now, in a narrative that zips along with the speed of e-mail, Torvalds gives a history of his renegade software while candidly revealing the quirky mind of a genius. The result is an engrossing portrayal of a man with a revolutionary vision, who challenges our values and may change our world.

Linus Torvalds was born in Finland. He graduated from the University of Helsinki and lives with his wife, the six-time karate champion of Finland, and his children. Linus currently works as a programmer on several projects for Transmeta.

David Diamond has written regularly for such publications as the New York Times, Business Week, and Wired. He is executive editor of Red Herring Magazine and lives in Kentfield, California, with his wife and daughter.