The President's Man: The Memoirs of Nixon's Trusted Aide (Hardcover) 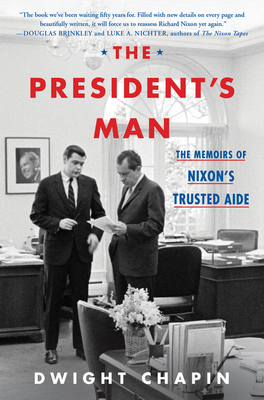 In time for the 50th anniversary of President Nixon’s epic trips to China and Russia, as well as his incredible Watergate downfall, the man who was at his side for a decade as his aide and White House Deputy takes readers inside the life and administration of Richard Nixon.

From Richard Nixon’s “You-won’t-have-Nixon-to-kick-around-anymore” 1962 gubernatorial campaign through his world-changing trips to China and the Soviet Union and epic downfall, Dwight Chapin was by his side. As his personal aide and then Deputy Assistant in the White House Chapin was with him in his most private and most public moments. He traveled with him, assisted, advised, strategized, campaigned and learned from America’s most controversial president. As Bob Haldeman’s protege, Chapin worked with Henry Kissinger in opening China—then eventually went to prison for Watergate although he had no involvement in it.

In this memoir Chapin takes readers on an extraordinary historic journey; presenting an insider’s view of America’s most enigmatic President. Chapin will relate his memorable experiences with the people who shaped the future: Henry Kissinger, his close friend Bob Haldeman, Choi En-lai, Pat Nixon, the embittered Spiro Agnew, J. Edgar Hoover, Frank Sinatra, Mark "Deep Throat" Felt, young and ambitious Roger Ailes, and John Dean. It’s a story that ranges from Coretta Scott King to Elvis Presley, from the wonder of entering a closed Chinese society to the Oval Office, and concludes with startling new insights and conclusions about the break-in that brought down Nixon’s presidency.

Dwight Chapin served as personal aide and then Deputy Assistant to President Richard Nixon, with responsibility for the planning and execution of the president’s schedule and appearances. He served as acting Chief of Protocol for the president’s 1972 historic trip to China. After his time in the White House, Chapin was publisher of Success magazine, then Managing Director, Asia, for Hill & Knowlton public relations. For the past twenty-five years he has managed his own consulting firm focused on communications and strategic planning. He lives in Riverside, Connecticut, with his wife, Terry. The President’s Man is his first book.

“The President’s Man is an engaging and provocative look at the Nixon presidency written by Dwight Chapin, someone with a unique experience in the Nixon White House.”  — Henry Kissinger

“In a revealing and deeply personal volume, Dwight Chapin has penned the ultimate ‘draw back the curtain’ on the presidency of Richard Nixon.”  — Karl Rove

“This book sheds a unique, interesting light on one of our most complicated and effective presidents. Because of Watergate, few people recall that Nixon was historically popular and remarkably successful. Anyone who cares about American history and politics should read The President’s Man.”  — Newt Gingrich

“Dwight Chapin’s The President’s Man is the book we’ve been waiting fifty years for. Rarely in U.S. history has someone spent so much time with a president and lived to write about it. Filled with new details on every page and beautifully written, it will force us to reassess Richard Nixon yet again. It is sure to become an instant classic on the era!”  — Douglas Brinkley and Luke A. Nichter, authors of The Nixon Tapes: 1971-1972 and The Nixon Tapes: 1973

“An intimate and insightful memoir that students of the era never imagined we would see… Dwight Chapin’s unsparing recollections make a significant addition to the literature of the Nixon administration and the annals of the postwar presidency.”  — James Rosen, author of The Strong Man: John Mitchell and the Secrets of Watergate

“Chapin’s autobiography offers some entertaining anecdotes about many who passed through his office and will appeal to Nixonians and to those looking for yet another very personal perspective on Watergate.” — Booklist

“Chapin provides an insider’s perspective on what he deems the White House’s “ethical culture” and major developments of Nixon’s administration, including the ending of official American involvement in the Vietnam War, nuclear weapons negotiations with the Soviets, as well as significant domestic achievements that Chapin believes were obscured by the Watergate investigation.” — Publishers Weekly

"[N]o staff member was closer to Nixon in the campaign of 1968, or for the first four years of his presidency, than his personal aide Dwight Chapin... if you would know what it was like to be at Nixon's side at the apex of American politics and at the beginning of the greatest fall of a president in American history... read this book." — Patrick Buchanan