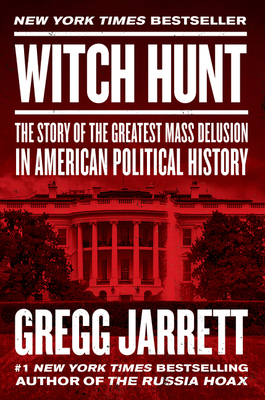 The author of the #1 New York Times bestseller The Russia Hoax picks up where that book ended with this hard-hitting, well-reasoned examination of the latest findings about “collusion” between the Trump Administration and the Russians, offering further proof that Special Counsel Robert Mueller’s investigation is nothing more than a politically motivated witch hunt.

How did a small group of powerful intelligence officials convince tens of millions of Americans that the president is a traitor, without a shred of evidence?

Now that every detail and argument set forth in The Russia Hoax has been borne out by the Mueller report, Jarrett returns with Witch Hunt, providing a hard-hitting, well-reasoned evisceration of what may be the dirtiest trick in political history.

In Witch Hunt, Gregg Jarrett uncovers the bureaucratic malfeasance and malicious politicization of our country’s justice system. The law was weaponized for partisan purposes. Even though it was Hillary Clinton’s campaign that collected and disseminated a trove of lies about Trump from a former British spy and Russian operatives, Democrats and the media spun this into a claim that Trump was working for the Russians.

Senior officials at the FBI, blinded by their political bias and hatred of Trump, went after the wrong person. At the DOJ, the deputy attorney general discussed secretly recording the president and recruiting members of the cabinet to depose Trump. Those behind the Witch Hunt have either been fired or resigned.  Many of them are now under investigation for abuse of power. But what about the pundits who concocted wild narratives in real time on television, or the newspapers which covered the fact that rumors were being investigated without investigating the facts themselves?

Factual, highly persuasive, and damning, this must-read expose makes clear that not only was there no “collusion,” but there was not even a basis for Mueller’s investigation of the charge that has attacked Trump and his administration for more than two years. It’s always been a Witch Hunt.

Gregg Jarrett is the New York Times best-selling author of The Russia Hoax. He is a legal and political analyst for Fox News, and was an anchor at the network for fifteen years. Before joining Fox News, he was an anchor and correspondent for MSNBC and an anchor at Court TV.  He is a former trial attorney.  He lives in Connecticut.

&#8220Democrats and the media continue to just lie through their teeth. What we’ve lived through— are still living through—has been a coup from the get-go. It is a plot to overthrow President Trump. There are so few people telling the whole truth about this; Gregg Jarrett is.”
— Rush Limbaugh

“Gregg Jarrett has done it again by writing a superb follow-up book to his number one bestseller, The Russia Hoax. His stunning account of how unelected officials plotted in the shadows to influence an election, sabotage a duly elected president, and drive him from office should alarm all Americans.”
— Sean Hannity

“If for no other reason, one should read Gregg Jarrett’s new book, Witch Hunt, for its excellent and penetrating analysis of the Mueller Report. In-depth and comprehensive, Jarrett’s breakdown unmasks the false narrative still being peddled by Democrats and the media.”
— Joseph DiGenova, Former Independent Counsel and U.S. Attorney for the District of Columbia

“Witch Hunt is both a riveting account of abuse of authority and a reminder of just how fragile our democracy can be. Jarrett thoroughly and convincingly paints a scary picture of officials at the highest levels of our federal government breaching the trust of the people in an attempt to undermine Trump’s presidency and remove him from office.”
— Jon A. Sale, Criminal Defense Attorney and Former Assistant Watergate Prosecutor

“Witch Hunt is a spectacular compendium….an encyclopedia of what went on in the biggest hoax and scandal in American history. I highly recommend it; it is an awesome book.”
— Dan Bongino

“When this moment in history finally passes, history will have Gregg Jarrett’s Witch Hunt to remind — on the record — of what really happened and who, really, was responsible for this disgrace.”
— American Spectator