The Quiet Zone: Unraveling the Mystery of a Town Suspended in Silence (Hardcover) 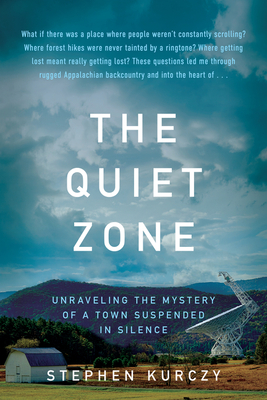 In this riveting account of an area of Appalachia known as the Quiet Zone where cell phones and WiFi are banned, journalist Stephen Kurczy explores the pervasive role of technology in our lives and the innate human need for quiet.

“Captures the complex beauty of a disconnected way of life.” —The Nation

With a new afterword to the paperback edition

Deep in the Appalachian Mountains lies the last truly quiet town in America. Green Bank, West Virginia, is a place at once futuristic and old-fashioned: It’s home to the Green Bank Observatory, where astronomers search the depths of the universe using the latest technology, while schoolchildren go without WiFi or iPads. With a ban on all devices emanating radio frequencies that might interfere with the observatory’s telescopes, Quiet Zone residents live a life free from constant digital connectivity. But a community that on the surface seems idyllic is a place of contradictions, where the provincial meets the seemingly supernatural and quiet can serve as a cover for something darker.

Stephen Kurczy embedded in Green Bank, making the residents of this small Appalachian village his neighbors. He shopped at the town’s general store, attended church services, went target shooting with a seven-year-old, square-danced with the locals, sampled the local moonshine. In The Quiet Zone, he introduces us to an unforgettable cast of characters. There is a tech buster patrolling the area for illegal radio waves; “electrosensitives” who claim that WiFi is deadly; a sheriff’s department with a string of unsolved murder cases dating back decades; a camp of neo-Nazis plotting their resurgence from a nearby mountain hollow. Amongst them all are the ordinary citizens seeking a simpler way of living. Kurczy asks: Is a less connected life desirable? Is it even possible?

The Quiet Zone is a remarkable work of investigative journalism—at once a stirring ode to place, a tautly wound tale of mystery, and a clarion call to reexamine the role technology plays in our lives.

Stephen Kurczy is an award-winning  journalist whose work has appeared in  The New York Times, The New Yorker, and The Christian Science Monitor, among other outlets. He graduated from the Columbia University Graduate School of Journalism, where he was a 2016-2017 Knight-Bagehot Fellow in Business and Economics Journalism. Kurczy has lived without a cell phone for over a decade.

"An expressionistic new work of nonfiction. Part folk history, part gonzo travelogue, The Quiet Zone colorfully annotates an elaborate contradiction: a last bastion of the disconnected world. ... Kurczy finds high drama and dark secrets in the woods, but he also captures the complex beauty of a disconnected way of life that is dying out at an alarming rate. ... A time capsule of a not-so-distant past, of an approach to life that is rapidly slipping from collective memory." — The Nation

"What a fascinating book! This corner of America is unique for its electromagnetic silence—but once Stephen Kurczy starts looking he finds that it's unique in other ways too. The Quiet Zone will live on in your memory."  — Bill McKibben, New York Times bestselling author of The End of Nature

"[A] fascinating, deeply reported and slightly eerie look at an unusual corner of America. ... With compassion and a journalist's eye [Kurczy] delivers a compelling portrait." — BookPage (Starred Review)

“Captivating. … A multilayered illustration of a unique community where things aren’t always what they seem.” — Kirkus Reviews

"A vividly written book that captures an unusual place with a story-teller's touch, perfectly timed to this moment of confronting our complicated relationships to technology." — ELIZABETH CATTE, author of What You Are Getting Wrong About Appalachia

"A quest for our most precious substance—peace and quiet—leaps with exuberant aplomb in to the murk of American kookery—electrosensitives, Nazis, unsolved murders—and reveals that simplicity is far more complicated, far more weird and wonderous, than the self-proclaimed #simplelife." — MARK SUNDEEN, author of The Man Who Quit Money and The Unsettlers

"Colorful. ... Kurczy succeeds in unlocking many secrets of this insular community." — Publishers Weekly

"An engaging and sympathetic study of the myriad people who call this unique place home." — Booklist

"An enthralling story." — The Parkersburg News and Sentinel (West Virginia)