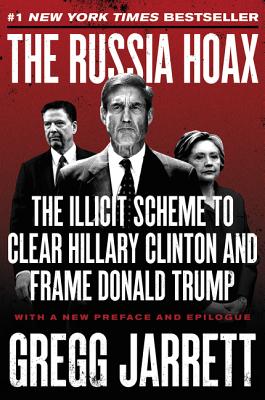 WITH A NEW INTRODUCTION AND AFTERWORD FOR THE PAPERBACK EDITION

Fox News legal analyst Gregg Jarrett reveals the real story behind Hillary Clinton’s deep state collaborators in government and exposes their nefarious actions during and after the 2016 election.

The Russia Hoax reveals how persons within the FBI and Barack Obama’s Justice Department worked improperly to help elect Hillary Clinton and defeat Donald Trump in the 2016 presidential election.

When this suspected effort failed, those same people appear to have pursued a contrived investigation of President Trump in an attempt to undo the election results and remove him as president.

The evidence suggests that partisans within the FBI and the Department of Justice, driven by personal animus and a misplaced sense of political righteousness, surreptitiously acted to subvert electoral democracy in our country.

The book will examine:

With insightful analysis and a fact-filled narrative, The Russia Hoax delves deeply into Democrat wrongdoing.

Gregg Jarrett is the New York Times best-selling author of The Russia Hoax. He is a legal and political analyst for Fox News, and was an anchor at the network for fifteen years. Before joining Fox News, he was an anchor and correspondent for MSNBC and an anchor at Court TV.  He is a former trial attorney.  He lives in Connecticut.

“If you want in one hand the entire compendium of the effort to overturn the election results of 2016 from the Steele dossier to the corruption of the deep state to the exoneration of Hillary Clinton to the Mueller investigation, if you want to have in your hand every detail, every explanation, get this book. From the front cover to the back of the book it is chock-full with evidence, explanations, the history of what happened, the timeline. And it’s written in a very enjoyable-to-read way.” — Rush Limbaugh