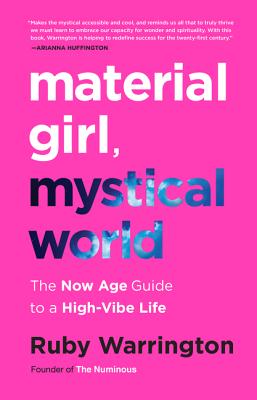 Utterly transporting and stylish, Material Girl, Mystical World takes you on an unforgettable journey through modern spirituality—from meditation and tarot to astrology—guided by wise and witty tastemaker Ruby Warrington, founder of The Numinous.

Inspired by the consciousness-shifting traditions that have moved seekers for generations, Material Girl, Mystical World is a fabulous adventure in the "Now Age"—a sophisticated upgrade on cosmic thinking, from healing crystals to doing your dharma, for women who know that a closetful of designer shoes can happily coexist with a deeply meaningful life.

Set against the backdrop of Ruby Warrington's own transformative path from her dream job as an influential fashion journalist to creating The Numinous, the high-style, high-vibe online magazine about spirituality for modern women, Material Girl, Mystical World invites readers on a colorful journey to discover their own path to personal enlightenment in every area of life, from love, sex, and relationships to fashion, beauty, health, and wellness.

Combining the wit and charm of a modern-day Carrie Bradshaw with the stylish soul of Elizabeth Gilbert, Warrington shows us that it is within our power, right now, to create a life that is both intentional and fabulous—while also contributing to a major shift in global consciousness.

From how to survive and thrive at Burning Man to creating rituals that celebrate the Divine Feminine to exploring the shaman in you, Material Girl, Mystical World is an inspiring call to arms for women looking to find their authenticity and voice in business, relationships, and spirit, from Brooklyn to London to Venice, C.A., and Black Rock City and beyond. A writer to watch, Warrington bestows on readers her wry, winning, and ultimately wise take on modern life.

RUBY WARRINGTON is a lifestyle writer and former features editor of the UK's Sunday Times Style supplement. In 2013, she created The Numinous, an online magazine that bridges the gap between the mystical and the mainstream. She is also the cofounder of Moon Club, an online mentoring program for spiritual activists, and "sober curious" event series Club SODA NYC. She now lives in New York City with her husband, Simon (a.k.a. "The Pisces").

“Makes the mystical accessible and cool, and reminds us all that to truly thrive we must learn to embrace our capacity for wonder and spirituality, and engage with something larger than ourselves. With this book, Ruby Warrington is helping to redefine success for the 21st century.” — Arianna Huffington

“I can so relate to Material Girl Mystical World! Ruby Warrington brings us the hottest spiritual trends in real time. The Numinous is my go-to-site for divine wisdom and soulful content.” — Gabrielle Bernstein, #1 New York Times Bestselling Author of The Universe Has Your Back

“I’m a massive fan of Ruby Warrington and her book Material Girl, Mystical World--a down to earth, current, relatable, and at times hilariously funny take on what it means to awaken now, proving that you don’t have to choose between the altar of the Goddess or Chanel.” — Rebecca Campbell, bestselling author of Light Is the New Black and Rise Sister Rise

“I love Ruby’s book! She writes about meditation in the context of spiritual activism, in a way that makes it accessible and fun. The deeper message of Material Girl Mystical World is one the world sorely needs.” — Bob Roth, Chief Executive Officer, David Lynch Foundation

“Stylish spirituality at its best. Ruby Warrington’s intrepid exploration of the mystical realm is sharp and refreshing. Material Girl, Mystical World is a fabulous book for people who are seeking more than just the obvious explanations about life.” — Tali and Ophira Edut, The Astro Twins, astrologers for ELLE Magazine