To Hell on a Fast Horse: The Untold Story of Billy the Kid and Pat Garrett (Paperback) 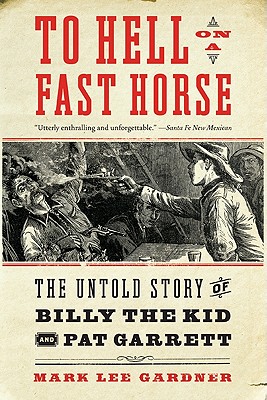 “So richly detailed, you can almost smell the gunsmoke and the sweat of the saddles. ”
—Hampton Sides, New York Times bestselling author of Ghost Soldiers

Billy the Kid—a.k.a. Henry McCarty, Henry Antrim, and William Bonney—was a horse thief, cattle rustler, charismatic rogue, and cold-blooded killer. A superb shot, the Kid gunned down four men single-handedly and five others with the help of cronies. Two of his victims were Lincoln County, New Mexico, deputies killed during the Kid's brazen daylight escape from the courthouse jail on April 28, 1881.

For new sheriff Pat Garrett, an acquaintance of Billy's, the chase was on. . . .

The first dual biography of the Kid and Garrett, To Hell on a Fast Horse re-creates the thrilling manhunt for the Wild West's most iconic outlaw. Mark Lee Gardner digs beneath the myth to take a fresh look at these two men, their relationship, and their epic ride to immortality.

Mark Lee Gardner is the author of Rough Riders, To Hell on a Fast Horse and Shot All to Hell, which received multiple awards, including a Spur Award from Western Writers of America. An authority on the American West, Gardner has appeared on PBS’s American Experience, as well as on the History Channel, AMC, the Travel Channel, and on NPR. He has written for National Geographic History, American Heritage, the Los Angeles Times, True West, and American Cowboy. He holds an MA in American Studies from the University of Wyoming and lives with his family at the foot of Pikes Peak.

“The double-helix relationship between Billy the Kid and Pat Garrett is one of the abiding fascinations of the West. No one has come closer than Mark Lee Gardner to capturing their twin destinies and their inevitable final collision....you can almost smell the gunsmoke and the sweat of the saddles. ”
— Hampton Sides, author of the New York Times bestsellers Blood and Thunder and Ghost Soldiers

“A masterpiece! Mark Gardner’s dual biography of Billy the Kid and Pat Garrett cuts through the myth to tell the real story of two real figures in the Wild West. Gardner’s scholarship is superb. This work can only be called a classic.”
— David Dary

“Incredibly deep research combines with the talents of a fine historian and writer to produce superb narrative history. The true character and relationship of these two iconic westerners emerge to suppress myth and correct more than a century of tomes laden with bad history.”
— Robert M. Utley

“Digging beneath the myths and melodrama, [Gardner] begins in Las Vegas during Christmas week, 1880, when the capture and confinement of Billy the Kid made national headlines... Gardner’s extensive research and authoritative approach ground this compelling historical recreation.”
— Publishers Weekly

“As gripping as any thriller.”
— Library Journal