The Game: Penetrating the Secret Society of Pickup Artists (Hardcover) 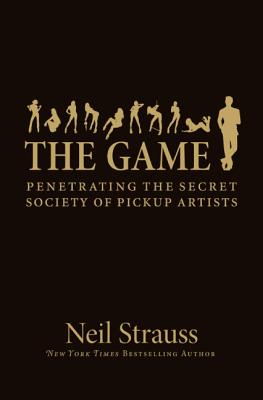 Hidden somewhere, in nearly every major city in the world, is an underground seduction lair. And in these lairs, men trade the most devastatingly effective techniques ever invented to charm women. This is not fiction. These men really exist. They live together in houses known as Projects. And Neil Strauss, the bestselling author, spent two years living among them, using the pseudonym Style to protect his real-life identity. The result is one of the most explosive and controversial books of the year -- guaranteed to change the lives of men and transform the way women understand the opposite sex forever.

On his journey from AFC (average frustrated chump) to PUA (pick-up artist) to PUG (pick-up guru), Strauss not only shares scores of original seduction techniques but also has unforgettable encounters with the likes of Tom Cruise, Britney Spears, Paris Hilton, Heidi Fleiss, and Courtney Love. And then things really start to get strange -- and passions lead to betrayals lead to violence. The Game is the story of one man's transformation from frog to prince -- to prisoner in the most unforgettable book of the year.

NEIL STRAUSS is an award-winning writer for Rolling Stone and the author or coauthor of ten New York Times bestsellers. He splits his time between Los Angeles and wherever the Jonas Brothers are.

“Strauss is either a sex god or the anti-Christ, depending on your perspective.” — The Daily Express

“The funniest book I have read all year.” — Tony Parsons

“Neil Strauss has it all figured out. When it comes to the mating dance, Strauss knows how to lead.” — Chicago Sun-Times

“Strauss is a superstar…a stunningly explicit book.” — The Times (London)

“The book everyone’s talking about.” — GQ

“The first time the alphabet of male seduction has been painstakingly translated and written down.” — The Observer

“a fascinating window into a world that Strauss has brought up from the underground. It’s impossible to put down.” — Calgary Herald

“To call it a book would be an understatement. I prefer to think of it as the Bible.” — The Sunday Mercury