Man About Town: A Novel (Paperback) 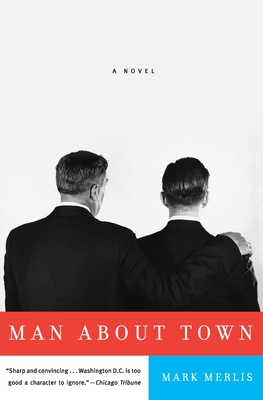 A congressional adviser and habitué of a cozy circuit of bars inside the Beltway, Joel Lingeman never quite felt middle-aged. At least not until he was abandoned by his partner of fifteen years and suddenly thrust into a dating scene with men half his age and no discernible trace of love handles. But this unexpected hole in his life inspires Joel's search for a 1964 edition ofan Esquire-like magazine that contained a swimsuit ad that obsessed and haunted him throughout his youth. Determined to find out what happened to the model shown in the ad, Joel slowly begins to understand what has happened to his own life. Sexy, smart, and deftly observed, Man About Town is a new twist on the idea that the personal is political and a must read for anyone who's ever wondered what happened to that first crush.

Mark Merlis grew up in Baltimore and attended Wesleyan and Brown Universities. He now lives in New Hope, Pennsylvania.

“An unexpected kind of gay fiction, especially with its insider’s look at the legislative process...different and ambitious.” — Seattle Times

“Merlis treats both his characters and readers as if they are smart.” — Washington Post Book World

“Washington DC, as Merlis portrays it, is too good a character to ignore.” — Chicago Tribune

“Brims with characters, events and ideas that, besides being greatly entertaining, stimulate discussion — Gay City News

“Merlis is a skilled realist who employs an understated humor-especially in depicting the Washington bureaucracy. ” — Library Journal

“An uncommonly grown-up fiction by a writer with a keen, affectionate eye for gay foibles and failings.” — Book Marks

“Sings with poignany…[Merlis has] a flair for subtle introspection and keen observation.” — Kirkus Reviews

“Stunningly good…haunting, funny, and masterfully written, American Studies provides keen insight into our own history and our lives.” — Genre

“A book that transcends genre in portraying the abyss that divides one ostracized human soul from all others.” — Los Angeles Times on American Studies